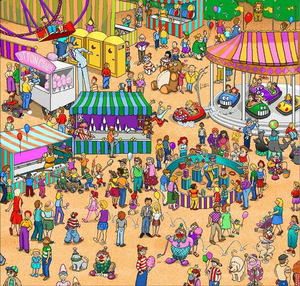 Screenshot taken from the version of the game hosted on Tekzoned.

Where's Waldo is a screamer animation created in 2002. It is inspired by the British series of books, Where's Waldo. It was made by a user named SuperLaugh.

It starts, while circus music plays, by showing an image of a large crowd, inviting you to find Waldo although he isn't actually in it. The image was taken from Where's Waldo in the Circus, a 1995 PC game. After about 30 seconds, a picture of Pazuzu from the 1973's horror classic movie The Exorcist pops up with a scream from the video game Mortal Kombat 2.

There's an alternative version of this with the face from What's Wrong? flashing with yellow lights in the eye sockets along with a different scream, and Scooby Doo laughs at the screen. Another even shorter version exists that features Regan MacNeil from The Exorcist at the end with two children screaming (actually Bart and Lisa Simpson from The Simpsons).

YouTube user PrepareForAScare uploaded one more alternative version on October 17, 2010. The image is that of a vampire with the scream of a girl instead of the original image and audio.

You made want to edit this article. The original source for this prank may come from Newgrounds here: https://www....l/view/57335

You can see Jeremy Winterrowd even commented that he originally saw it on the link specified.

waldo is hard to fnd

i always got that strange feeling he was never in it the whole time .

what a lazy flash animation

i agree, its just a static image and then another one after that.. in-fact it gives me chills a little from it.
Permalink
You are ignoring the author of this comment
Show comment | Manage ignore list

Dont look, hes not even there.