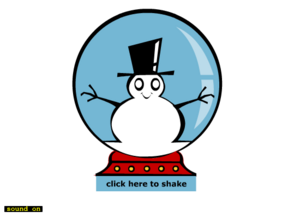 Snowman Snowglobe, also known as Shake the Snowman, is a Flash game made by Jeremy Winterrowd in 2005.

In this game, you have to shake the snowman to make him vomit. There is a button that you have to click to make the snowman shake. When you press the button very fast, the snowman will make a grossed out face, and finally vomit. Then, the camera zooms into the vomit. Not long after, a picture of a gingerbread man in the vomit pops up along with the same scream used in The Maze.

The original version of this game had a picture of Regan MacNeil from The Exorcist used as the screamer. This version has been replaced with the milder gingerbread man version.

Imagine getting scared by a gingerbread man.