The Maze, more commonly known as the Scary Maze Game, was a Flash game created in October 2004 by Texan game developer Jeremy Winterrowd.

This Flash prank disguises itself as a simple maze game in which the player has to utilize their mouse cursor to move a blue little dot through the maze. At the start screen, there is a note informing the player that the objective of the game is to pass through all 4 levels, and the player cannot touch the walls; however, there are only three levels in the game. The game also explains that it is best with the volume on, but, there is no sound in any part of the game.

The first two levels are easy to complete. But as the third level is reached, the walls begin to shrink and have sharp turns, making it difficult to avoid touching them. This usually makes the player concentrate on the screen. Then, near the first curve to the left of the maze sharp part (The game also knows if the player is cheating; if they use right-click), an image of Regan MacNeil in her possessed state from the 1973 supernatural horror film The Exorcist pops up along with a loud, distorted scream that plays twice, scaring the player.

The game was uploaded to Jeremy's now-defunct personal website, Winterrowd.com in 2005. The original version of the game had some slight differences in color, where orange/yellow with alternative text was used instead of cyan. There's an alternative version of the game that was used in the comedy television series America's Funniest Home Videos, where the face at the end is replaced with the one from What's Wrong?,[2] due to concerns regarding copyright.

Many people have posted videos of other people reacting to the game. The first reaction video on YouTube was uploaded by OUTLAW713, on February 21, 2006.[3] In the reaction video, a young kid, Justice, is playing the maze. Then, he gets surprised by the screamer. Shocked, he starts screaming and repeatedly hitting the computer screen. He then runs to his stepdad, Chad, and starts crying. The original video and channel were terminated or taken down some time in 2009, however, some reuploads had over 27 million views. The most viewed Maze Game video was uploaded by YouTube user nalts and has accumulated over 43 million views as of October 2017, However, the channel was terminated by YouTube moderators. 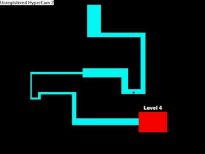 Other videos of the mysterious level continued to circulate. This video, which has more than 1.25 million views as of 2019 showed the cursor make a shortcut (which in practice would have killed the player) in level 3 which unlocks a trigger to level 4 (pictured); once finishing the level, the game goes back to the main screen; text asks the viewer, "care to try a little bit faster this time?"

The Maze has been parodied on Saturday Night Live. There is also a game called Save Justin Bieber, created by Jeremy Winterrowd himself, which replaces some parts of the game with a picture of Justin Bieber and the maze color is light purple instead of cyan.

This article is available in different language