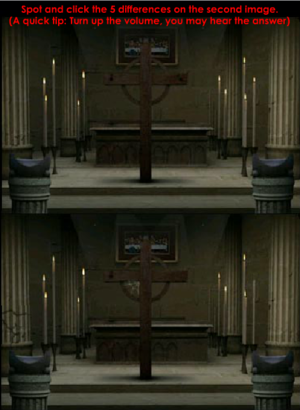 The Exorcist: Beginning Movie Promotional Game is a screamer game made in 2004 by Warner Bros.

When the player finds all of the difference, an animation of Sarah from the film hitting the screen will be played, followed by the picture of Regan MacNeil From The Exorcist along with a loud scream, you can hear the girl crying in the background.

In the old version of this screamer, it can only be found on Winterrowd, where it shows the same animation of Sarah, followed by 2 pictures, one is someone's eyes and fades out eventually, and cuts into another picture of someone's wide mouth, which appears to be screaming, the picture flashes for a few seconds, before turning into some cover art, and some release date underneath.