For other screamers named "Optical Illusion", see the Disambiguation Page. 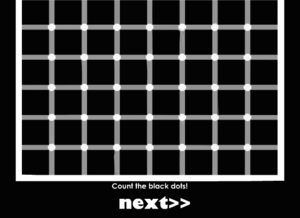 Optical Illusions is a flash animation developed by Jeremy Winterrowd in 2006.

as the game title suggests, the game was supposedly a quiz, so the player will be asked some unclearly defined questions while looking at the pictures, which ask "How many faces do you see" and more, there is a button that leads to the next illusion with different questions, but not for long, at the fourth illusion, the button was no longer clickable, so it will evoke a screamer which shows Sarah from Exorcist: The Beginning

punching the screen before cutting to a still image of her.