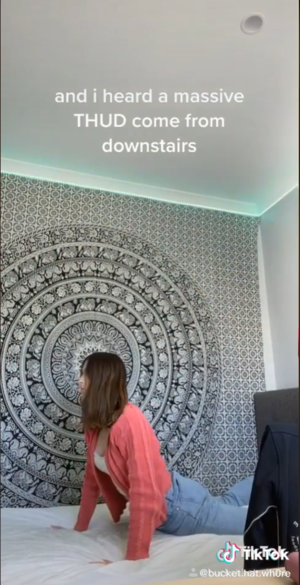 One of the first viral TikTok screamers!

The video is similar to Impossible Backflip and Funny Face in its pacing. The video starts with a teenage girl preparing to do the worm; the text "literally the SCARIEST thing happened to me today..." and "TRIGGER WARNING" appear. The girl then starts doing the worm when the text "I was home alone filming me doing the worm to send to someone on Snapchat." Right after "and I heard a massive THUD come from downstairs" and "then someone started knocking on my bedroom door" appear, the girl headbutts her face onto the screen while the scream from FNAF plays. Finally, the text "sike" appears.

This video went viral with over 85 thousand likes and 554 thousand plays as well as many copycats based on this TikTok following this format such as Impossible Backflip.

There is also a version made by Steven Lerner (Albino Blacksheep), titled She Got Moves, which has the face replaced with a skull.

that legit scares me.