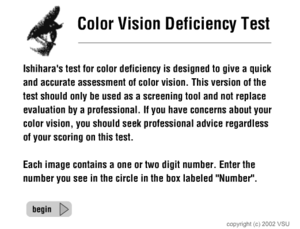 The flash game takes the player through a few levels of a typical color blindness tests, in which the player has to find the number in the circle. After each level players get provided with their results. In the last and most difficult test, it is almost impossible to distinct the number (it's 5). When the player clicks the number box, a picture of Judith Cutter from Basket Case pops up with a extremely loud scream. but after that, a ninja will then show up and saying: "''You have been sabotaged''", and a link to Liquid Generation crushes him. An alternative version of this screamer exists where the liquid generation watermark is replaced with the sound "I see dead people."