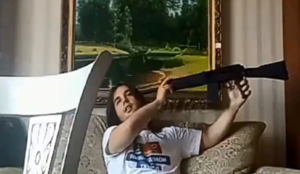 The Guy In The Video

1444 is a shock video of a man shooting himself on livestream. and the video starts with a Russian VK user Gleb Korablyov pointing Rifle on his head after 3 seconds then he triggers the gun completely damaged his head, blowing his brains out and the video ends.

On October 17th, 2019, Russian VK user Gleb Korablyov launched a live broadcast on the platform. During the broadcast, Korablyov took a Saiga semi-automatic rifle, pointed it to his head, warned a person to wait before notifying his parents of his suicide and shot himself.

On October 17th, 2019, now-deleted YouTube channel GORE reposted a short clip of the video as "1444", with the video gaining over 151,000 views in three days before being taken down by the YouTube moderators.

Starting on October 20th, 2019, the video received futher spread through discussions on social media. Similar to Momo, it was rumored among Spanish-speaking internet users that the video was cursed by the original uploader on the deep web, and that the curse could only be lifted from the viewer by commenting the date on the video. At that time, multiple users made posts warning against watching the video. For example, Twitter user irkepoc gained over 13,700 retweets and 10,900 likes in two days

In December 2019, another Trend DoNotGoogle On TikTok telling You Not To Search On Website "1444". The video Has Over 100K Likes On TikTok.

So ridiculous that people think this was cursed, I made a rant on it on my Deviantart back when it happened. People are dumb.

I never saw the full video (only screenshots of before he shot himself) until now and it’s very fucked up. I saw Robert Budd Dwyer's suicide video before as well, people killing themselves is horrible

Do not put a gun to your head. So easy to understand.