Duckpack51 is a graphic shock video of a young man getting beheaded by what appears to be a criminal gang. The video is named after the now deleted Blogspot where it originated from. The original video went viral in June 2021 and showed a clip of a girl dancing on TikTok before cutting to the man being executed.[1]

The video originated on a Blogspot page titled Duckpack51, though the blog was quickly deleted after the video went viral. The video was first uploaded by the user Mayengg03 on TikTok, who was banned after he uploaded the video. During the video's release, the TikTok moderators have tried their best to investigate who's behind the video.[2]

At first, the video depicts a girl dancing to the song "Dick" by Starboy3, and then is replaced by the execution video of then 19-year old Mexican criminal Rodolfo Belluci, who began his criminal career at age 15. The video takes place in what appears to be either a shower stall or a locker room. Throughout the video, the executors call the victim names in Spanish, including the words "puto" and "pillo", which are usually for males. 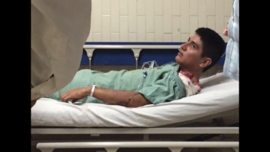 Rodolfo Belluci in 2016 recovering from being shot in the forearm and shoulder.

After he was murdered, he had his corpse scattered in Cuernavaca, Morelos. The execution took place in February 2019, and the video went viral in 2021 after it was uploaded to TikTok.[3]

The edited video of Rodolfo's beheading went unnoticed by TikTok's moderation team, and immediately gained a massive amount of negative attention from TikTok users and some mainstream media magazines including Newsweek, BristolLive, etc. When asked about the video by Newsweek, a spokesperson for TikTok responded with:

During the viral spread of the video, hundreds of users on Twitter tried warning others.

"We appreciate the concerted effort by our community to warn about an unconscionably graphic clip from another site that was spliced into a video and brought onto TikTok. The original video was quickly removed, and our systems are proactively detecting and blocking attempted re-uploads of the clip to catch malicious behavior before the content can receive views.
We apologize to those in our community, including our moderators, who may have come upon this content."[4]