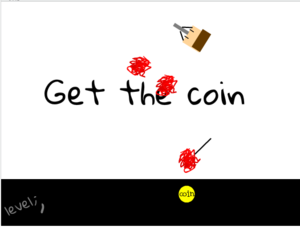 Make sure you don't catch anything else.

Not Scary Rly Fun is a Newgrounds game created on November 18, 2018, by the user GizzyGazzy360.

The game consists of getting the coin with what seems to be a paintbrush. There's enemies around the coin when you spawn that take the form of red scribbles. It's intended to mock screamers, because the screamer is the thumbnail (a picture of Ahenobarbus Henocied that appears in the game with a loud scream) and because sometimes you spawn into the enemies, causing it to appear as the game over scene. Plus the developer said that they made this game "as terrible as possible."