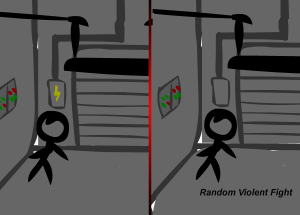 The first scene of the game.

Game Of Coolness is a Flash game made by Emby, uploaded to Newgrounds on February 21, 2009. It consists of finding the differences between pictures taken from Emby's past animations; the name of each referenced animation is stated on the bottom right corner each time. Once the user clicks on "Play", a "ready" screen counts down from 3, and then the game begins. There are ten scenes in total; some of them may involve more than one difference between the images, but the game is programmed so that only one difference is clickable, and it tends to be the case that it's the tiniest, least noticeable detail. After finding the difference in the final scene, a picture of Baby Oopsy Daisy from Demonic Toys

appears with a loud scream.

This is a game based on observation. You will look at two scenes from one of Emby's Flashes, and you must spot the difference between the two. Remember, the left picture is always correct, so the right will always have the difference among the two.