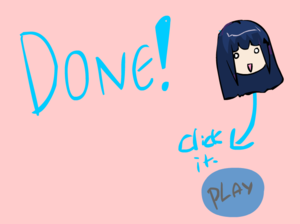 There is no sexual content in the game (Unless you use the H-Flash version.) but only for anyone who tries to do something inappropriate.

Hinata dress up is a dress up game on Newgrounds themed around Naruto character Hinata Hyuga, with a screamer booby trap, it was made by Puffsgain.

After pressing the play button to play the game, the player gets to choose between a bunch of different outfit options to apply to/remove from Hinata, from leg-wear to upper body wear; however, if one tries to edit her bra, a zoom in and out picture of Tomino's Hell (which is actually a paint called ”I can't be a wife anymore”/”あたしはもうお嫁にいけません”, painted by Tatsushima Yuko) suddenly appears with the scream from What's Wrong, followed by another long, echoing scream.

The game is not over after this screamer, because then it returns to the dress up game, only now depicting Hinata as morbidly obese in a bikini, next to a KFC bucket as a joke, with the phrase, ”TRUE FORM NO JUTSU!” with a twangy guitar tune playing in the background and the option to dress her up with two summer dresses.