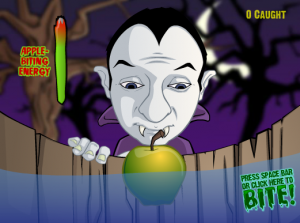 Don't do it, Vampire!

In this game, the player controls a vampire, and has to bob for apples by clicking on the bottom right button or pressing the space bar when the apple bobbing meter is on red. A remix of the Halloween theme plays in the background quietly. However, after four apples are caught, a razor gets stuck in the vampire's gums, he starts screaming rather loudly and blood covers the screen. A ninja will then show up and say you have been sabotaged, and a link to Liquid Generation crushes him.

never knew the game was on Newgrounds