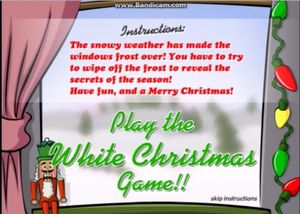 Don't put your finger on the window, It's going to leave fingerprints!

The game features a window overlooking a cartoony Winter landscape, with Christmas lights and a nutcracker figurine on the sides. The instructions, which are narrated by a female voice, tell the player that the window has been frosted over, and challenges them to wipe off the frost to "reveal the secrets of the season". A snippet of the Christmas carol Deck The Halls, played on a harpsichord, can be heard in the background.

Once the player presses 'Play' or skips the instructions, a finger appears on the screen, which can be moved by the mouse to wipe off the frost from the window. Wiping it will reduce the frost in some areas, which will, however, quickly freeze over again. The animation and the screamer will always play out the same, regardless of where or how much the player wipes the window, even if they don't wipe it at all.

Moments after gameplay begins, a blurry figure resembling Santa Claus appears in the background of the Winter landscape. He soon disappears and then re-appears in several different spots, seemingly advancing a bit towards the player's window every time. Eventually, he will appear in the foreground near the center, after which an edited Santa Claus with a face from the 1997 horror movie Jack Frost, and a pointy hammer in his hand that has blood on both ends will suddenly pop up with a loud scream right in front of the window, which gets immediately smashed in.