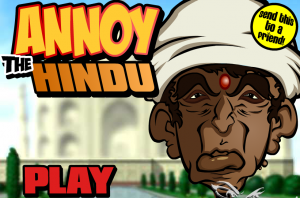 Yeah... Poking anyone in the forehead for no reason is sure to annoy or provoke them, serves you right...

This game features a comic caricature of a Hindu man standing in front of the Taj Mahal, with some sitar music plays. The object of the game is to keep annoying the Hindu by continuously poking the bindi on his forehead, in order to get him to eventually attack the player. every time the player clicks the bindi, the Hindu will calmly say something like “Enough!”, “Ouch!” or “No more!”

And the Anger Level bar on the right will go up a bit. When it reaches about the halfway point, long before the player would expect it, the Hindu will suddenly freak out and leap towards the screen with a loud scream as if he was trying to strangle the viewer, while the background gets tinted in red color.