How to make your own Beer-Powered Air Conditioner 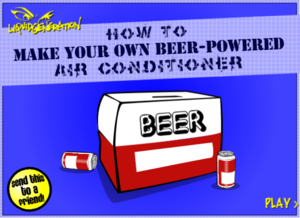 Don't get too drunk, ok?

As its name suggests, it details an eccentric way to power a box-fan using beer cans and a cooler spigot. It lists how to do so via 11 steps; however, by step 10, when it tells you to "turn on the fan and get cool!", a disgusting, morbidly obese woman in the nude pops up with a very loud scream used in other Sabotages, after which she says, in a comical voice, "Kiss the back of my fat ass, and I'll cool you off with one of my amazing FARTS!"

Unlike most other Sabotage screamers, the sabotage jingle and ninja do not appear, however, a replay button pops up.

Also, the intro to the song Let the Rhythm Hit 'Em by Eric B & Rakim is playing in the background.