At around 8pm (MST), Screamer Wiki will be updating to MediaWiki 1.39. Expect some minor downtime.

Are You Going To Heaven Or Hell? (The path of savior)

Are You Going To Heaven Or Hell?

After starting the flash, viewers are greeted by a piously smiling man in a sweater vest, who introduces himself as Simon Right from the fictitious Path of the Savior church in Tampa, Florida. He starts talking about the book of Revelations, saying that the final days are upon us and that most of us, including our children, will go to Hell. Then, he is about to present the viewer with a few simple "Yes or No" questions based on the Ten Commandments, to determine whether Jesus will save them or condemn them to Hell “like so many of today's criminals and sodomites”.

All questions are first narrated by Simon Right himself, but are later also displayed in text. Solemn choral music plays in the background the whole time, while the top bar displays a couple of scrolling nature images.

The first question is

“God says in the first commandment, “you shall have no other gods before me”, which means that if you've ever put a friend, yourself, or even your grandparents before God, you've sinned. Can you honestly say that you've never done that?” 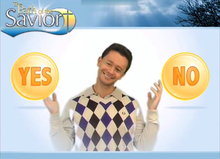 Simon Right presenting the viewer with a choice.

“The second commandment tells us that you shall not worship any false idols. If you love money, fame, success, or even your grandparents more than you love God, then you are worshiping a false idol. Are you guilty of this sin?”

“In the third commandment, we are warned never to take the Lord's name in vain. Have you ever done this? If so, then you are reducing God, he who gave you Baby Jesus, to a filthy swear word. Are you guilty of this sin?”

After the third question, regardless of the viewer's choices, a close-up two-frame picture of a green, bearded man putting his finger up his nose all the way through one of his eye sockets pops up with a high-pitched scream and metal music in the background. This is followed by Simon Right, now dressed in shorts and a bra, wearing a wig and carrying a large champagne bottle, dancing provocatively to the viewer, cheering and slapping his butt. The words "you're going to HELL" appear on the screen, which is also sung out in the song and lip-synced by Simon Right.