The Maze of DEATH 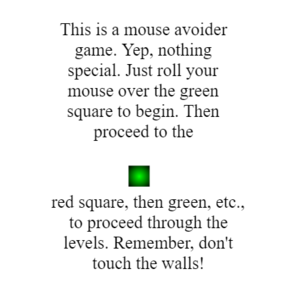 The Maze of DEATH is a flash game made by Emby on Newgrounds.

Being a popular game during its time, it has been given many sequels, such as The Maze of DEATH 2, 3, IV and V. similar to The Maze, you have to get around a maze, but this time, instead of moving the cursor, you have to click on one of the boxes to progress. Once you hit the fourth level and complete it, it gets replaced with a shaking picture of a skeleton that has only one eye with hair.