Emby's profile picture, depicting a cat wearing a hat that is clearly edited, on a blue background.

Emby or known as Hatonacat (Hat on a Cat) is a former flash creator and now aged 28 years old.

Emby have launched his Newgrounds account in November 2008 at age 16, with the first game published, titled: "Buttface Dressup v2.0" in Aug 20, 2008, from September to December, 4 games were published, some resulted in lower scores, One such game, titled: Maze of DEATH, became a series with the same name, a sequel was published becoming one of best Emby's creation in 2009, having more views than the original, this leads Emby to create more, with different mechanics, and the final one was titled: "Maze of DEATH V", though not his final screamer due to Game of Coolness was published after.[1]

In March 2009, a YouTube account created by Emby published with the alias: hatonacat, The rest of the content besides the newer ones, contained screamers, short films, gameplay videos, or about his old game: Pixel Shooter, all of his screamers uses the audio from the very first The Maze of DEATH game, his newer content is him doing the tapdance.[2] 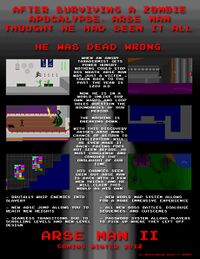 "ARSE Man" also become one of Emby's series, originating as a stand-alone game on Newgrounds in October 2009, it's a sidescroller and a mix between Castlevania and Ghosts 'n Goblins, the objecetive is to survive an onslaught of zombies and armed only with a gun, and must venture out of a "castle of DEATH" as to make it way back to reality, Emby said that it plays like a "dated 2001 amateur Flash game.[3]

ARSE Man II was a huge sequel to the original, the game was debuted to be released at Thanksgiving event, with only 3 worlds have finished, Arse Man II reached development hiatus after Christmas 2009, the development resumed in November 2011, but slowed down due to bugs, game crashing, loss of data and literally "had no new files or copies that worked properly or even opened", but managed to continued to reworking the entire game into a whole new file, older content from pre-hiatus are being revamped, eliminating the "dated mechanics" and bugs.[4]

In March 2013, Emby uploaded a teaser for his upcoming game called: F.P.S, an abbreviation to 'First Pixel Shooter', the game is a pixelated first-person shooter game where the player controls the blue figure to shoot red enemies with a gun, the player can also "level up and dominate in offline multiplayer-esque Arena mode, survive wave after wave in Survival mode, and build custom levels for export in the Level Editor."[5][6]