Look at this picture for 25 seconds and you will see SpongeBob and Patrick! 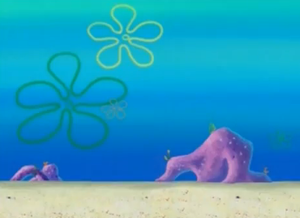 Look at this picture for 25 seconds and you will see SpongeBob and Patrick! is a screamer video uploaded by YouTube user Robert’s Channel of Random Stuff, the third channel amongst The Maniac in the Mailbox and Robert the Loud House and SpongeBob Fan on August 14, 2018.

The video starts with a picture from the SpongeBob episode “Pranks a Lot”, with the user stating that if you, as the title implies, look at the picture for 25 seconds, you will see SpongeBob and Patrick. Then he tells you to wait. Then, after 25 seconds, the same picture of Mr. Krabs with salt in his eyes from “SpongeBob Sped Up” plays with the user screaming. Then, for the last 10 seconds, the user asks if you found them, then says that your life is a lie. The video then ends with the user then saying to “subscribe for more quality content”.

good god this video was cringy