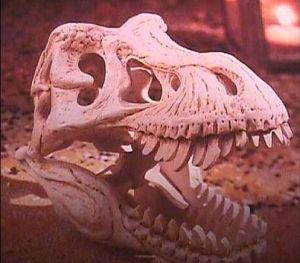 Dinosaur Skull is a screamer video, uploaded to YouTube by user VenerableDread on October 14, 2006. The video has accumulated over 3,500 views since it was first uploaded.

At the beginning of the video, a text appears, and it is saying: "What is wrong with this dinosaur skull? Look closely.", It then proceeds to show a still image of a supposedly fake T-Rex skull, making the viewer concentrate on what's wrong with it. However, for about 4 seconds, the picture zooms a little bit towards the camera, with the same scream from What's Wrong?. Another text shows up at the end, stating: "Meh. Nothing really but a scream! Pranked again by VenerableDread." The video then ends.