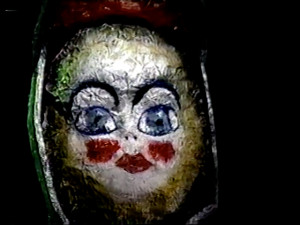 Teletoon a Canadian television channel (Equivalent to Cartoon Network in the US), aired an ID featuring a screamer not long after their launch in 1997 as part of their former adult block Teletoon at Night.

The ad takes place in a city at night, where a lone baby carriage rests. A baby's face can be seen within it. After the music builds up, we see in a close up that the face is moving to synthesized heartbeats. Not long after, the face bursts like paper to reveal a set of monstrous teeth, which opens to reveal more teeth followed by a toothed appendage that hits the camera. All this is accompanied by a low pitched scream, resembling the sound used from K-fee commercials.