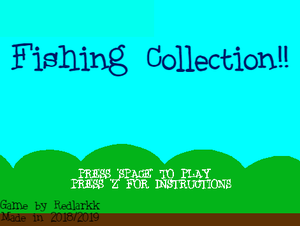 Fishing Collection!! was a screamer game by MJC03, now known as Redlarkk on this wiki. The Screamer, at first, appears to be a simple fishing game for kids. On the title screen, players can click 'Z' to access the instructions. If the player then clicks 'O', it will load up a jumpscare warning - being the only way of knowing that the game is not legit. The player must click 10 swimming fish to win, and they will be presented with a screen 'calculating their total time'. After 10–17 seconds, edited version of Ellis (her pupils are wide than unusual) pops up with loud demonic scream (actually an edited version of the old lomando.com scream) - then presenting the player with a 'Thanks for playing'screen including ellis (mousoumanager), scream (edited by michael clardge) and others.

Clardge went on to make another game; called Quiz Night with the Scratch Cat!

The screamer was deleted in early 2019 but was soon reuploaded on July 20th 2019. It was reuploaded again on August 25th 2019 after being voluntarilly taken down.