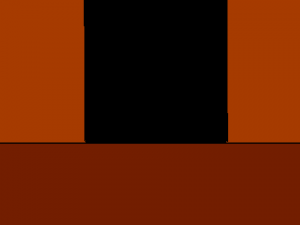 The project begins with an empty, dark room, the player has given an instruction which tells about the controls, the player can only move using W-S keys and a spacebar does nothing, the objective is to enter the room, When entering, they are seen with darkness, However, after 15 seconds, an animation of doge appears, approaching the player, along with the same scream from FNAF 1, a text appears stating "ded" afterward, the screamer can occur when they are not entering the room, there are no endings to this game.