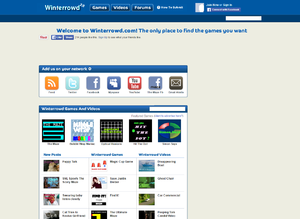 The site that started a craze of scares, pranks and reactions...

Winterrowd.com was a well-known website full of screamers made by a man named Jeremy Winterrowd. There are games and videos designed to trick people to get scared, like The Maze, Hit the Dot, Optical Illusions, Swearing Baby and more.

Winterrowd also held a contest in that same year called the Winterrowd Prank Contest, where you had to record the reactions of someone and upload them to the website and he would upload them to a channel named prankcontest. The website was getting bigger and bigger everytime there was a screamer uploaded, depending on how famous it was and how many reaction videos there ever was. The website was also very controversial, considering that it had many scary games and videos, but overall, it had a very good reputation, and it can be considered the father of all screamers.

Winterrowd is bad! Toy Theater is the best!