Ghost in the London Dungeon 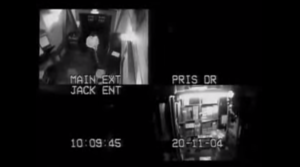 You have to feel bad for the security guard who discovered this footage...

The video has been thoroughly analyzed by experts but they have so far offered no explanation as to what it is." In the next scene, there are two fuzzy separate security camera images with the words "MAIN EXT JACK ENT" on the left and "PRIS DR" on the right. The timestamp 05:59:50 and the date 20-11-04 are displayed at the bottom. The image goes fuzzy for a moment and the time advances to 10:09:43. You can also see, what appears to be, a janitor holding a broom walk out of range of the camera on the left.

After 34 seconds, a man with long white hair, black teeth and wearing rags, jumps up, his face filling the screen, and yells: "JEAAAH!". He stays like that for a while, staring at the camera with his mouth wide open. After a brief pause, he seems to faint and descends into oblivion. The following text then reads: "Did you spot it?" which the logo is shown.

I’ve noticed the only warning of when the screamer comes in this is when the timer goes by one minute very fast. Security camera screamers are always noticeable.

What's even scarier is the room that the screamer guy is in when he comes...

I shall call JEEAH!! Guy

I wonder who the JEAH guy even is? 🤔
Permalink
Retrieved from "https://screamer.wiki/index.php?title=Ghost_in_the_London_Dungeon&oldid=26835"
Categories: