The Luna Game series is a series of downloadable games based on My Little Pony: Friendship Is Magic. The creator was Ceremi, Almost every game and the related game had screamers. The series focuses on Luna as being a protagonist in all series.

At the start, the player controls Luna using arrow keys to either move left or right, or even jump, the player spawns in a terrain with platforms, After around 10 seconds, the screen cuts into 2 edited pictures, one is a picture of Pinkie pie with black eyes and white pupils, the other is a skinned Applebloom against a full moon grinning evilly, while a loud, strange noises can be heard, the game stays on the images, until the player can closes the game using Task Manager or turn off the device.

After closing the game, The user's desktop is now filled with pictures that were used as a jumpscare (that one with Pinkie pie with no eyes), all of the text files and pictures are labled: "The end is neigh".

In the second game, it stays back normally, and the player is told immediately to run by holding a shift key. After going further, at which point a picture of Luna with zalgofied appears briefly along with a loud, static noises, After this, the world suddenly changes into dark, red version, Snowstorm noises can be heard, the player's movement is now slow, the player must walk through until encountering a big chasm on the ground and fall on it, While falling, the background eventually fades into black, revealing its a game over screen of Luna falling, while some disturbing music plays.

In addition, the major difference was that the art resources were moderately improved unlike the first one, the original image that was used on the game over screen was created by a user called PterosaurPony, and it can be originally found on DeviantArt.

Once again, the player controls Luna on a platform but in a forest setting actually, while catchy background music plays, The player must run through until the background music starts to slow down and distort, going in, the static sounds appears eventually, breaking off the music, the world suddenly goes dark, and the trees are now bloody, at this point, the player must keep on going until encountering a huge gap on the ground, falling on it result in the same image of Pinkie pie with zalgofied eyes used from the first game.

The player can continue running, However, the level loops and leads to the same gap on the ground again, which leads the player to fall down on the gap, but this time, falling down the hole for the second time leads to a screen flashes into several images of zalgofied ponies, When the screen changes back to normal, the screen cuts into Luna's corpse, After around 5 seconds, she opens her eyes, then cuts into a close-up image of her, the game closes after this.

The game returns back to normal, Luna is now on a terrain with blue sky in the background, while a cheerful music plays, the player later encounters a cliff, this is the only place where the player should go to, when they fall on it, result in 2 text above the blue dot, which reads: "It didn't have to turn out like this...", "You didn't have to die...", then blood appears on the screen, along with a text: "BUT NOW YOU'RE IN MY WORLD", the player is now shown with Luna being thrown off the sky, the world is all red, and strange, the player must run through the obstacles before the darkness comes on the screen and catches up to you, if the player gets caught in the darkness, at which point several disturbing images of Pinkie Pie flashes on the screen, However, it is impossible to get away.

After this, the screen goes back to the blue dot part with a zalgofied text, it is obvious that is seems to be that message from BEN Drowned: "You haven't met a terrible fate haven't you?", After a short second, a messed up 8-bit music started to play while some glitchy blocks start to appear on the screen, forming a path, the same thing happens where the darkness comes up to the player again, the only choice is to get to the higher ground, the higher the player goes, the darkness gets darker, When the player goes back all the way left on the top layer, and jump over the pillar, a creepy Pinkie appears standing closely and disappears.

If the players are able to reach the end and run right into the same creepy Pinkie, lead the screen into pitch-black. a sound of a heartbeat can be heard, and see the same, iconic image of Pinkamena from "Party of One". The heartbeat gets louder and the image gets lighter until it suddenly cuts to the same picture from Luna Game 2, the screen goes back to the same image with Pinkie Pie laughing in the background.

Luna spawns in Princess Celestia's castle. the player is told immediately that they can interact with the ponies by pressing the spacebar key (must go in front of them), When the player interacts with Celestia, the player is asked if it would be nice for you to go out and make some friends. After you exit on the right, the player moves into a grassy area with some nice music playing. All six of the mane cast can be found on the map, and each of them has problems and the player must do something about it. 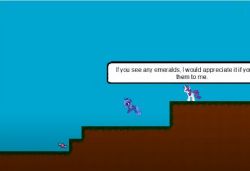 The gameplay of Luna Game 0

The player can play one of six different levels, each with a different item. After collecting 49 items, the player can collect the 50th, which is black and white. When the player touches it, the music stops to a loud thunder. After this, the only thing you can do is continue on, where the ground suddenly disappears from underneath, some creepy music starts playing as the screen fades to black.

The screen flashes white, and an image of Nightmare Moon appears followed by Nightmare Moon's glowing eyes flashing. The screen returns back to where the player stopped almost immediately, but everything is now red. When the player continues back to the previous area, another creepy song begins to play, and the ponies you talk to say that Pinkie Pie is looking for you.

Nothing else happens, until the screen fades back in, the player can be seen standing alone with Pinkie Pie with a red sky behind you. Pinkie Pie has a slash going through her, and the words: "B... But... Why...?", After a short second, the top half of her body begins sliding off, and the game shuts off. However, the game opens again and displays a disturbing image of Pinkamena along with a text at the bottom: "This Isn't Over". The game closes shortly after.

If the player changes their system date to Friday the 13th, the player gets a special cutscene, where Pinkamena will face Nightmare Moon, Nightmare moon asks why she killed Pinkie Pie, saying that: "a party doesn't make up for 1000 years of suffering", making Pinkamena scared, wanting to talk with some sense into the princess, Nightmare Moon then break the fourth wall: "SHH! Someone is listening" the screamer appears once again.

The player starts off on a flat strip of grass at night with happy music playing in the background. After a short amount of walking, the player encounters a familiar cliff. Though this time when the player falls down, the player safely lands on the ground. After some walking, Luna's movement starts to slow down, and eventually the text bubble “I’m really tired” appears over her head. She collapses a moment later, along with another text bubble: “I’ll just rest for a moment…”. The screen slowly fades to black afterwards.

After the music stops, The player is now on a somewhat completely white world with only a single black line as the ground below the player, When walking to the right, they encounter the 8-bit limbo sprite from Luna Game 4, if the player touches it, which leads the ground below them to dissapear, and some strange background noises started to play, the player can notice the sky blocks and ground blocks randomly appearing, After waiting for the grounds to generate, it is revealed that the entire sky behind the player was being built, After another few moments, a strange screech sound can be heard, the floor disappears again, This time, when the player falls, the blue sky turns into an empty, dark red sky.

When the player hits the ground again, the player is greeted with ground blocks with familiar line design from Luna Game 4, Continuing to walk right will reveal a smaller cliff, jumping on it again will trigger the ground blocks to randomly start turning into 8-bit limbo blocks from Luna Game 4, along with the second soundtrack in the 8-bit limbo world: "Incoming Darkness" started to play, and somewhat a dark shadow starts eating up the screen to the left, if the player doesn't regard escaping from the darkness, will lead back to the next map, if the player manage to outrun it, several obstacles appears, the same thing will happen if the player goes in the end.

After being caught by the darkness, the player is shown with Luna lying back down on the ground from the first scene where she took a nap, After a moment, she stands up, Walking to the right will reveal some shadow ponies, Walking next to some ponies will trigger some texts, While playing the game, the static will flashes on the screen, After this happens, the text above the ponies heads will change, all of the ponies will change back into their original sprites, However, the static only lasts for a second, After walking through, the static does not happen again, and the player is now able to sprint, When going back to the left, the player encounters Nightmare Moon, where the player loses control over Luna, Another creepy song started to play, followed by heartbeat, As Luna walks towards her, leads to another static, This happens one more time before reaching Nightmare Moon, and when the player does leads the screen changes into black.

The player controls Luna using arrow keys to move and space to jump, Once the player goes down that pit, the player get out of it, Though, the only way to do it is to try moving and jumping around until the wall disappears, Move forward, which leads to a message: "And Luna lived happily ever after And nothing scary happened, ever".

When the game finishes loading, the player appears on a poorly drawn grass field, if the player gets far enough, at which point the same screamer appears, (It is poorly drawn.) After a few seconds, the game closes.

NOTE: The following games contain screamers which may even contain viruses!

The Luna scream in the second game sounds like a distorted clip of the AVGN yelling "ASS!" from the Top Gun episode. Probably just me though.

True, it could be a possibility that it's the same sound but distorted.
Permalink
You are ignoring the author of this comment
Show comment | Manage ignore list

I remember being unironically spooked by this when I was younger. Good times.

I have found an old thread about the maker of the Luna Games, which their name is "Ceremi".