Hotel Mario 6, also known as Hotel Mario 666 was a screamer game, with gameplay similar to the Luna Games. It was developed by Conscripts and published on Gamejolt in August 2014. As of 2017, the game was either deleted by its creator or got taken down for an unknown reason.

Despite its name, the game plays like the traditional Mario Bros games - though a remixed version of the main menu theme from Hotel Mario plays as the BGM. The only controls involve the arrow keys for moving and jumping; the movement speed is notably slower than would otherwise be expected. The game has pretty crude graphics: Mario has a whopping 6 frames of animation in total, three for his walking animation (the game doesn't allow running), two for his jump, and one for his surprised reaction.

Eventually, Mario will come across 11 mushroom platforms and will encounter Peach after getting past them. Once the player gets close enough to Peach, static noise will interrupt the BGM, followed by complete silence. At this point, touching Peach will result in a normal image of CDI-Peach from the Hotel Mario cutscenes for up to 10 seconds, at which point the world will suddenly change into a dark, red version, and Peach's image becomes zalgofied. This persists for another 9 seconds, when the image zooms in, showing Zalgofied Peach's eyes accompanied by the same scream from K-fee commercials. 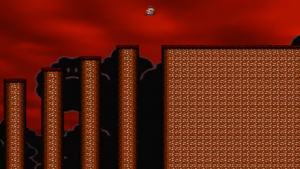 Mario, shortly before falling into the darkness.

With the jumpscare now over, the player still has to progress through the game, which isn't far from its end. Shortly after "meeting" Peach, Mario will come across 10 pillar-like platforms that lead to flat, long terrain. However, the terrain isn't a real platform, and so Mario will fall through it.

This leads into a completely black room, only containing a trembling, visibly scared Goomba. Should Mario get close, it'll explode, with the blood and bone effects from the old Mortal Kombat games. The game subsequently crashes. Trying to relaunch the application results in an image of CDI-Mario appearing, and an extremely slowed-down audio clip plays while displaying the final message: "Mario is dead. It is too late." CDI-Peach's jumpscare appears right after, crashing the game once again and generating two final text files. This involves messages that have to do with the game's lore.