4chan is an imageboard website made in 2003.[1][2][3][4][5] The site hosts multiple different topics boards with topics, including video games, fitness, politics, music, anime, and more. It is an English-language counterpart of Futaba Channel (known as 2chan at the time of the site's creation), a Japanese imageboard site discussing online culture. 4chan is known for popularizing several internet memes made by its community, and other than that, it also became known for being involved with screamers and shock sites including Jeff the Killer, Fukouna Shoujo 03, Smile Dog, Glory Hole Foundation, Poochee and Pansy and others. The site doesn't require registration, so users can post anything on boards anonymously,[3][5] but users can also use a nickname for themselves on the site.

As mentioned, the site was introduced in 2003 by Christopher Poole, better known online as "moot", when he was at 15-years-old.[1][2][3][4] The site was born shortly after Poole copied Futaba Channel's source code and translated the text into English.[1][2][4] He then advertised the site for people interested in Japanese culture.[5] Poole left 4chan after the Gamergate controversy;[6] he officially announced that he sold the site to Hiroyuki Nishimura,[2] a founder of 2channel. 4chan users also helped popularize Encyclopedia Dramatica.

The earliest screamer to be on 4chan was Smile Dog. The famous story of this creepypasta explains that there are no copies of the original Smile Dog, but fake variations have been spreading across 4chan's paranormal-related board, /x/, on 2008.[7]

A flash animation called Derpy animation.swf was first mentioned on January 3, 2012, in /f/, a board list of flash animations. The animation was supposed to lure My Little Pony fans into thinking the screamer was a list of Derpy's animations.

On March 14, 2018, Shuaib "Shuaiby" Aslam started a Livestream on his YouTube channel titled "Hey". Tarp was put on the windows to cover any debris. He starts a Discord call and two other people can be heard talking, one of them crying. A bit later, he holds out a piece of paper with the text "Bye /r9k/", loads a shotgun, and finally shoots his face, splattering blood on the ceiling.

On November 18, 2021, a 4chan user named Armus posted a thread claiming to have hacked kingliam3's account along with the popular Scratch copy of the Flappy Bird game and added Ronnie McNutt's suicide on it. 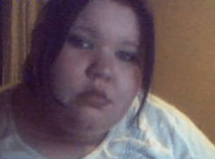 The controversy started after it was believed that the person in the Jeff The Killer picture was Katy Robinson (pictured), who had committed suicide after being bullied on 4chan.