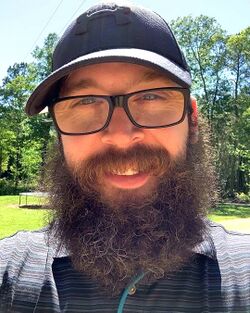 Another photo of Ronnie.

The Suicide of Ronnie McNutt incident took place on a live stream on Facebook, broadcasted at 9 pm on August 31, 2020. The live-stream depicted a 33-year-old war veteran, Ronnie Merle McNutt (May 23, 1987 – August 31, 2020), playing his favorite game, until he shot himself in the face with a single-shot rifle and died of a self-inflicted wound while hundreds of viewers were watching. Like Gleb Korablyov's suicide live-stream, the footage has spread across many social media networks and forums such as YouTube, Facebook, Twitter, Discord, TikTok, 4chan, and many more. This incident caused many controversies, such as internet trolls setting up account impersonations of Ronnie, being used for fraudulent scams or as a bait-and-switch to lure viewers, as well as computer calls being interrupted by users displaying the video.

The live-stream features 33-year-old Ronnie McNutt playing his favorite game (offscreen) while drunk and angry. He begins ranting about his job and coworkers while viewers frantically try messaging him. After a while, he gets a phone call from a person he knows (most likely his ex-girlfriend). After that, he hangs up the call and misfires himself with a hunting rifle, blowing his face completely off while his blood splatters on the camera and his brain tissues fall to the floor. The full video would stay on his bleeding corpse on the chair for a few minutes, until officers arrived at his home after someone alerted the department, only seen in the entire video.

Ronnie had recently broken up with his girlfriend[1] on the night of August 31, 2020.[2] He sent his final message on Facebook at 7:32 p.m., with an image stating "Someone in your life needs to hear that they matter" and "that they are loved. That they have a future. Be the one to tell them. TobyMac #SpeakLife", referring to Toby McKeehan's song "Speak Life". His suicide happened on his live-stream on Facebook[1][3][4] broadcasted at 9 p.m. local time.[4] In the live stream taking place at his home in New Albany, Mississippi, Ronnie appeared very drunk and depressed.[5] There were over 200 viewers[2] who advised him to get help[4], which Ronnie ignored. Moments before committing suicide, Ronnie received a phone call from a person he knows, whether it be his ex-girlfriend or his mother. At 10:30 p.m.[6] Ronnie pointed the rifle under his chin and fired, blowing off his face completely. The New Albany Police Department was immediately alerted by his friends;[1] however, emergency responders did not arrive at his house until after his death. Facebook stated that this "completed broadcast was on the platform for 2 hours and 41 minutes".[7]

Ronnie's friends, including his close one, Josh Steen,[6] reported the live stream to Facebook before Ronnie killed himself.[5][7][8] At 11:51 pm, Facebook later dismissed one of the reports because it did not violate its guidelines.[1] The video was not taken down by the platform until eight hours later. However, the video had already been uploaded to many platforms, such as YouTube, Twitter, and TikTok. TikTok was also criticized for having the suicide appear on many users' "For You" pages.[9][5][10][6] Media outlets also stated that some re-uploads of the suicide were also disguised as clips of cute animals.[9][1][6] Ronnie's close friend Josh Steen blamed Facebook for failing to remove the video earlier. Facebook responded stating they were "reviewing how we could have taken down the live-stream faster."[8]

Steen reported most comments on the live stream as "harassment" to Facebook. Facebook however claimed they dismissed his reports because he was not an account holder. Similarly, trolls were also setting up accounts to impersonate Ronnie on platforms.[2][3][5] Ronnie's mother, Elaine McNutt, also stated that there were many false GoFundMe pages about Ronnie Mcnutt appearing, and none of them "are legitimate!".[11] 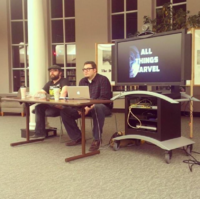 Ronald Merle "Ronnie" McNutt was born on May 23, 1987, in Mississippi, United States. He was one of five children born to Mr. Cecil Ronald McNutt and Elaine Rooker McNutt. Ronnie McNutt was a member of the Celebration Church in Tupelo and also enjoyed or was involved in performing theater plays. He was an Iraq War veteran who served in the United States Army Reserve and was employed as a worker at a Toyota plant in Blue Springs, New Albany.[14][10]Ronnie was also a member of the Comicons club and wrote some comic book reviews on websites. According to his close friend, Joshua Steen, he was later diagnosed with Post Traumatic Stress Disorder shortly after his military service.[10]

During the early 2000s, Ronnie McNutt met Joshua Steen at a community theater production of Footloose, which was located in the city of Mississippi, while they were in high school.[1] Ronnie McNutt joined JustUs Geeks, a podcast by Josh Steen, with the intention of connecting "with the millions of geeks and pop culture nerds all across the globe." He started writing some reviews for the official website in 2014. During the live stream, Steen tried calling Ronnie with two phone numbers that he could easily recognize, only for Ronnie to decline the call on the stream.[15] Some media said that the gun that he used to shoot himself with was a shotgun, but Steen stated to the media that it was a single-shot rifle.[4]

Ronnie was predeceased by his father, and they were buried in the same cemetery.[4]

Ronald “Ronnie” Merle McNutt, 33, passed away Monday, August 31, 2020 at his home in New Albany, MS. He was born on May 23, 1987, to Mr. Cecil Ronald McNutt and Elaine McNutt. Mr. McNutt is a member of the Celebration Church in Tupelo, MS. He enjoyed and performed theater plays. He was a member of the Comicons club. He was employed at the Toyota plant in Blue Springs, MS. Mr. McNutt is a Veteran of the United States Army Reserve where he served in the Iraq War.

A Celebration of Life Service will be at 2:00 P.M. Wednesday, September 2, 2020 at McMillan Funeral Home with Pastor Rob Sevilla officiating. Burial will follow at the Snowdown Church of Christ Cemetery.

He was preceded in death by his father, Cecil Ronald McNutt; and four grandparents, Raz and Elois Rooker, and Jeff and Helen McNutt.