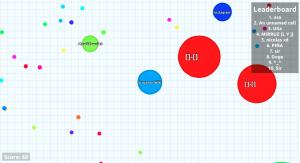 Screenshot of the game called Agar.io.

Agor.io was supposed to be a prank for people who misspelled the website Agar.io. When the website was opened, a flashing picture of Jeff the Killer, the same .swf from Anne.jpg, popped up, inverting its negativity at a seizure inducing rate, accompanied by a looping, paulstretched, ear-piercing scream with the text: "L3mm1ng Braz1I App3r Yazir Alyx WanR00t H0rs3 D0nny" with the image shifted a bit. When the user tried to close the website, a window popped up with the text: "U SCARED BRO LOL", leading to users having to force-quit their browser in many cases. As of August 2015, the website is now offline.

The creator of the Agor.io website was found to be Preston Kellenberger, living in Sardinia, Ohio.[1][2]

There were multiple social media posts about the site, the majority of them coming from Reddit. Many of the posts are simply to warn people about the screamer, but this one in particular was supposedly written by a parent whose nine-year-old son had an epileptic seizure when trying to play Agar.io because they misspelled it as Agor.io. The mother states she is talking to a lawyer and is attempting to track down and prosecute the creator of the Agor.io website.

I'm gonna make a video on this. Working on research currently for the script.

What's your channel name? I'd love to check it out!
Permalink
Retrieved from "https://screamer.wiki/index.php?title=Agor.io&oldid=22816"
Categories: