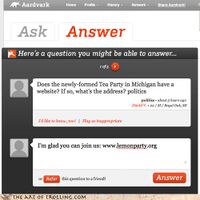 A bait and switch to trick somebody into thinking that Lemonparty.org is the website of the "tea party" movement.

Lemonparty.org is a shock site that leads to an image, entitled "lemonparty.jpg" of two elderly men on a bed kissing each other, with another sucking on the penis of the one lying on the bed. This is one of the earliest shock sites that only shows single image.

The site was possibly meant to lure people into thinking that it was about the Lemon Party of Canada, a Canadian political party, from which the name was supposedly derived. This site was originally hosted by Eric Johnson[1], but was later passed on to other sellers who bought the domain.

Originally registered on October 3rd, 2002[2], the site[3] once featured a yellow text on the top left corner that said "Lemonparty.org", while "If You Wanna Be Happy" by Jimmy Soul plays. On November 21st, 2002, the site[4] added a link below the image that said "omfg crazy! Click here to wash your eyeballs!", which leads to an image[5] of a kitten with metals below it. However, this link was shortly removed as of an unknown date. In 2003, the site just showed an image in the center of the page without the watermark and the link.

Edited versions of the image, including one of a man named Keith Boadwee squirting blue paint from his anus, began to appear on the site by the 2010s. On December 27, 2013, Buzzfeed reporter Joseph Bernstein interviewed the original owner of the domain, Eric Johnson. The owner stated that he parked the site for $450,000 and has been running the site for 9 years.[1] Shortly thereafter, the site removed the image and was turned into a pornographic website, no longer relating to the classic Lemon Party itself. Later, the site then put the image back to its state. Johnson had also mentioned in the interview that the image had originated and spread "in the early aughts while being passed around internet relay chat".[1]

As of right now, The site shows the image in HD while the title of this page reads: "Lemon Party - A game of bingo gone horribly wrong."

Lemon Party is a compound word that's combined with "Lemon" (as a slang; meaning "old men") and "Party". With this combined, its meaning could possibly be a party of old men.