From Screamer Wiki
(Redirected from Creepypastas)
Jump to: navigation, search

Creepypastas are user-generated paranormal stories that spread across the internet, mostly appearing on notable sites such as 4chan, with the intention of scaring the readers. These stories include suicide, murder, and other morbid things. Many of the first creepypastas were created on 4chan's /x/ board, which focused on the paranormal. Creepypastas can be listed here if they have or relate to screamers.

Ahenobarbus Henocied is the unofficial name of a pale girl with bloodshot eyes and a bloody mouth. This name actually comes from a Facebook page, which also used the profile picture and was known for sending users with such shocking content. The account was shortly terminated by Facebook for posting child pornography and gory content. The image can be dated back to 2005, but it is said that there have been a few images similar to this that have been spreading since 2004. It was also featured in a creepypasta story "Gurgles & Bugman".

Smile Dog also known as Smile.jpg is a creepypasta that's rather an image with no origin, but stories about the image existing has been published by Creepypasta writers online.[1][2][3] ​The original story of Smile Dog tells the writer had met an old woman named Mary E, who was one of the 300 victims who found the actual image of Smile Dog on the small Chicago-based Bulletin Board System in 1992, in which she was interviewed by the writer about her experiences with the image, such as not being able to sleep after the witness. The story claimed that the image apparently made people descend from insanity to suicide, and the victims who saw it on the board are completely unknown except for Mary E; However, after a day of her witness, she unknowingly received a floppy disk with a file on it, being completely aware of what person she should have sent this to. When demanded by the narrator, she denied sending the disk because she didn't want to cause the narrator any harm if she "spread the word". Online, one hacker supposedly flooded the image into SomethingAwful forum, causing everyone to have anxiety and plagued vivid nightmares. The original image is unknown, but fake recreations of what many people described the original exist. Its first appearance was made on 4chan's /x/ imageboard in 2008.[1][2][3]

Jeff the Killer is one of the classic creepypastas. In the story, a child named Jeff who had recently moved into a new neighborhood with his family and brought into a new school. On his first day of school, Jeff and his brother Liu were later demanded by the bullies for lunch money, threatening to be killed with knives if they did not comply. Jeff, however, begins fighting with the bullies, but they manage to paralyze them all, soon leaving out the scene where they continue studying at school. That night, the police arrived at Jeff's home about the incident with the bullies that happened that day. Liu soon took this incident as responsible for Jeff, which drove him into depression. His parents, concerned, advised that he would feel better if he attended a party, where he ran into the bullies. Jeff again begins fighting with the bullies, killing one of them. But later, he was doused with alcohol and set on fire, burning him alive.[4] After having his bandages removed, he then discovered that his face had become disfigured, which had a ghostly pale, but Jeff seemed to like this face this way and continued along with it. Throughout the story after the horrid incident, he became insane, carving his own face with a smile, burning off his eyelids, and killing his family later on. He becomes a serial killer who sneaks into people's home and whispers "Go to sleep." before killing them.[4][5]

This story above was the remix of the earlier story created by Sesseur in 2009, where it tells the story behind how Jeff had his face became disfigured after a gallon of acid was accidentally poured into his face while cleaning his bathtub. This creepypasta has also received controversy after it was believed on 4chan to be an unedited picture of Katy Robinson, a woman who committed suicide in 2008.[5][6] However, it was later confirmed that the picture of Jeff was originally uploaded on 2005 to the now-closed Japanese site, pya.cc.

IM HAPPY.gif is a screamer animated image that originated as a creepypasta, made by user Multiverseman in 2011. Another version of this GIF is older, posted to 4chan's /b/ board in around 2008. This GIF proves to be very dangerous and, at its most deadly, to anyone who views it, with very harmful effects on both viewers and their computers. The smiley face scans the viewer with its eyes and mouth, bypassing webcam permissions and automatically turning your webcam off if the user views the gif for more than 5 seconds. As the face slowly frowns, images will load up and audio files will be played. After about five minutes, it would show the text "Have a nice day" and would close the browser on the user's computer. 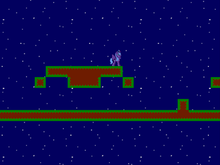 Luna Game, a game similar to Sonic.exe, is also known as a creepypasta.

Sonic.exe is a video-game creepypasta story about a child named Tom, who receives a disk copy from his friend who begs him to destroy it. However, not listening to his friend's warning, he instead played the game only to find it as the haunted version of Sonic the Hedgehog. The antogonist, which was referred to in the story as "X" or notably "Sonic.exe", appears almost identical to Sonic, with the difference being that he has black eyes and red pupils, as well as having a huge grin.Tom played three characters, including Tails, Knuckles, and Robotnik, who were later killed by X in the end of each level. After all three characters are killed, a hyper-realistic close-up of Sonic.exe appears with the lines "I AM GOD!" on the screen. Later, Tom soon found his Sonic plush toy stained in blood.

Originally posted by user JC-The-Hyena to Creepypasta Wiki, but it was soon deleted by the admins due to it being poorly-written.[7][8] ​Soon after the Gamejolt developer MY5TCrimson created a game based on the story,[7] the creepypasta has been referenced and based on in many screamers, such as An Ordinary Battle Amongst Familiar Hills, as well as its own fan-made games such as Tails Save Mobius.exe.

Luna Game, which was based on the example of Sonic.exe, was also known as a creepypasta, disguised as a simplistic platform game featuring Luna from My Little Pony as the main character. The game often presents the player with rather unsettling images of the characters from said show while accompanied by a loud scream and noises. Officially published by Ceremi, the game was created using Game Maker 8 Pro and originally published on the MLP forum, Equestria Daily, on April 3, 2011.

NES Godzilla Creepypasta is the story of a video gamer named Zachary, who discovers several disturbing characters in Godzilla: Monster of Monsters game cartridge, one of his favorite childhood NES games. Shortly after defeating Gezora and Moguera, Zachary noticed something odd with the game, such as several disturbing characters and more, which Zachary will uncover. Originally posted to a website forum Bogleech,[9]

BEN Drowned also known as Haunted Majora's Mask Cartridge, is a web series an alternate reality game created by Alexander D. Hall, better known as "Jadusable". The story of Ben Drowned is about a graduate student named Jadusable who received a haunted cartridge of The Legend of Zelda: The Ocarina of Time from an old man at a garage sale. The cartridge contained a save file of the former owner BEN still on it, so he created his own save file for himself, named "Link". However, Jadusable had encountered a bug where NPCs would sometimes call him "BEN" rather than "Link" itself, which led Jadusable to take the blame for the save file of BEN. He then deleted the save file to fix the problem, and it worked. There was nothing odd happening when Jadusable tried modifying the game out of place, until after he tried the Clock Tower trick, he was brought into the middle of a Majora boss fight room, where Skull Kid stared at Jadusable for a few seconds. This prompted him to visit 4chan and discuss about this haunted game.