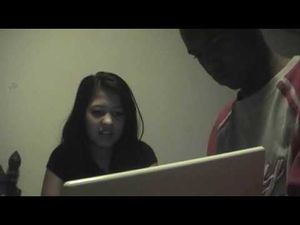 Yet another "reaction" video from more than a decade ago.

3 Orangutans 1 Blender is a non-existent shock video that has many fake reactions to it on YouTube. Little is known about this alleged video since only reaction videos actually exist of it, all of which contain the same soundtrack and audio of the said-animals as well as the titular "blender"-like sounds. However, there is no evidence of the video actually existing.

A comment by user Roberto Martinez found in this particular reaction (which has since been removed) describes the potential contents of the shock video. To summarize:

“3 Orangutans 1 Blender is set in a jungle, at a camp with trucks, cabins, a giant building, and lots of men working at it, where a large group of the men, of apparent Indian/South American descent, wearing yellow and green camouflage with a strange symbol indicating they are part of some terrorist group or some unknown cult. They walk into a building and takes out a number of abused, caged orangutans from a giant shelf. The men also had tattoos and were shirtless as well. It has caused people who watched the video to have seizures, permanent nightmares, or commit suicide.

Once they take the animals out of the building, they proceed to hurt them with knives and machetes and cover them in substances such as bleach and possibly lemon juice to aggravate their pain as they screech from it. After this, the titular "blender"-like machine appears, described as something very similar to a giant version of an Animal Waste Shredder, but it is rather tall, black-colored to look more menacing, and had a balcony with a metal bridge connecting to the other side of it, with human remains being seen inside of it. 6 orangutans are thrown into this shredder, with further bleach and lemon juice poured onto them as their agony progresses as they die. At one point the men turn off the machine to commit a number of other highly obscene, disturbing acts such as defecating on their corpses from the metal bridge above, cutting off their own limbs into the shredder, and throwing their weapons and even human remains and clothes into it as well before they turn it back on. Some orangutans survived while some are still alive still screeching in agony, as well as it being a bloodbath of other things as well. Eventually, a ski-masked, fat man appears and walking into the giant shredder with a chainsaw to kill whichever orangutans are still surviving.

The final section of the video consists of the men taking the last three remaining orangutans and feeding them to three tigers which eats their penises until they throw them into the pen, and then they take one man and feed him to the tiger along with them in the same pen, and they film his demise as much as the hurt orangutans, after performing the same actions on these 3 orangutans as they did with the previous ones, the men now have no limbs at all, and they take their remains and throw them into the shredder, where the video ends.”

The comment also implies the video is part of a larger, 3-hour version, and that the men and orangutans appearing in the video are counted to be 97 and 19 orangutans, and that the video was actually made by a home video camera between the 80s and 90s, but the video wasn’t published until sometime around 2006 somewhere, possibly on the dark web. The user then finally warns the viewer never to view the footage.

There is another rumor claiming the video is not so shocking, and it just being someone preparing a smoothie for a group of orangutans in a kitchen and then them being over-excited about it respectively.

Finally, another rumor claims that the audio file is all there is, and the video itself doesn't exist.

On November 21, 2019, YouTube channel Unus Annus released a video about 2 Girls 1 Cup, which mentioned 3 Orangutans 1 Blender. This brought back a discussion about the video again.

Damonico "puking" into a bin while watching 3 Orangutans 1 Blender.

On January 25, 2008, YouTube user Persephone Rose uploaded a video titled "3 Orangutans 1 Blender REACTION VIDEO!!", mostly likely as a joke to lampoon the topic of shock sites and videos of people reacting to them. In the video, he "reacts" to a video his supposed friend Ian sent him. The description of the video describes 3 Orangutans 1 Blender as "way worse than 2 Girls 1 Cup and BME Pain Olympics!". A few months later on March 8, 2008, Rose's YouTube friend Damonico uploaded a video titled "3Orangutans1Blender", which is similar in content to Persephone Rose's video. These two videos were uploaded during a time when shock videos like 2 Girls 1 Cup and 3 Guys 1 Hammer were very popular, and many other YouTube users of the time joined this trend of reacting to 3 Orangutans 1 Blender for views.