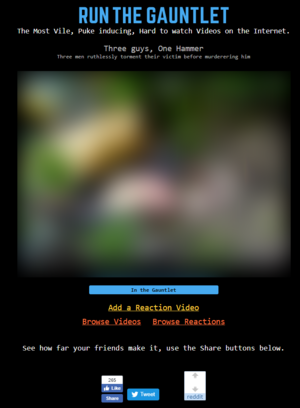 The sickest snuff video to ever be published on the internet...

3 Guys 1 Hammer is a Ukrainian shock video that has been circulating since 2007. It shows some video footage of three teenage boys (Viktor Sayenko, Igor Suprunyuk and Alexander Hanzha) torturing and murdering 48-year-old Sergei Yatzenko in the woods who was disabled by a recent bout with cancer. The three teenagers became known as the "Dnepropetrovsk Maniacs". Previously, they had killed 20 other people prior to making the infamous video. Sayenko, Suprunyuk and Hanzha were eventually arrested and went on trial for the murders. They were eventually found guilty, with Sayenko and Suprunyuk both being given life sentences and Hanzha (who was not involved in the actual murders) getting nine years behind bars for two armed robberies that took place before the murder spree.

The man who was murdered in 3 Guys 1 Hammer was found missing after riding his Dnepr motorcycle. There is a footage showing the three guys complaining about something in Ukrainian. After a few seconds, they notice Sergei Yatzenko riding his Dnepr motorcycle. As soon as he gets near, they kick down his wheels, causing the motorcycle to fall over. The boys trapped him in the woods before he was killed. The murderers previous murder scene was two teenage boys in Pidhorodne, named Andrei Sidyuk and Vadim Lyakhov, who were brutally attacked while they were fishing. Vadim managed to escape by hiding in the woods. The maniacs then killed Sergei.

The video starts off with two males in the woods, one of whom is trapped under what seems to be debris. Abruptly, the teenage boy standing over the adult victim attacks him with a hammer concealed in a plastic bag, effectively turning the victim's face into a bloody pulp. After several seconds of close-ups of what used to be a face and a few discomforting gurgles, a screwdriver is skewered and twisted into the victim's stomach by the cameraman, then into the dying man's left eye. The victim was finished off by two large arcing blows to the head with the hammer for the final time. The assailants then promptly run out of the woods and head nearby to their car, where they wash off the blood.

On July 31, 2013, a ListVerse writer named Mike Floorwalker wrote an article titled "10 Videos Of Violence And Insanity", where "3 Guys 1 Hammer" is ranked in second. Floorwalker advised against watching the video due to its disturbing nature, despite the list containing other videos that involve murder.

I can't go to sleep without seeing the bloody face mess

My first shock video and hopefully my last.

what did this man do to them???

These kids should burn in hell for their crimes

I saw this as a kid and was mentally never the same ever since....

The 3 men just both needed a snickers.

2 months ago
Score 0 You

THIS IS THE WORST VIDEO EVER!!

as someone who has seen the worst shit on the internet, I think it is pretty bad but the Mexican cartel videos are a bit worse for me. I advise that you shouldn't look up any cartel videos if you don't like this one.
Permalink
You are ignoring the author of this comment
Show comment | Manage ignore list

i had a fear of this video and continue to now

10 months ago
Score 0 You
MAXWELL'S SILVER HAMMER BY THE BEATLES!

8 months ago
Score 0 You
咋看啊

Who the hell thought this shit was a good idea?!

6 months ago
Score 0 You

Google says a life sentence in Ukraine is 25 years and that's it. In a large number of other countries the sentence can be "indefinite" depending on the circumstances.

Why do we even keep these kind of people alive its not like they can ever be released back in to society and contribute anything positive.

6 months ago
Score 0 You
as an athiest, these kids should go to hell

one month ago
Score 1 You
Stolen comment
Permalink
Retrieved from "https://screamer.wiki/index.php?title=3_Guys_1_Hammer&oldid=103642"
Categories: