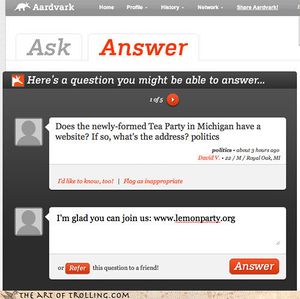 A bait and switch to trick somebody into thinking that Lemonparty is the republican Tea Party movement's website.

Lemon Party is a shock site, it was created in October 3rd, 2002 and made by heyya.org

According to DomainTools, lemonparty.org was registered on October 3rd, 2002. Originally the entire site consisted of the pornographic image set to the 1963 doo-wop song “If You Wanna Be Happy” by Jimmy Soul. However, as November 21st, 2002, the site was updated with a hyperlink to a picture of a cat along with a text saying: omfg crazy! Click here to wash your eyeballs!

The image has been mentioned on some television shows, such as in a sketch on Talkshow with Spike Feresten, and dialogue on Archer, The Simpsons, The Cleveland Show and 30 Rock. 30 Rock made at least three allusions to a "Lemon party," including when Liz Lemon's father, Dick Lemon, says, "It wouldn't be a Lemon party without old Dick! The website has also been described by Jimmy Fallon on the Opie and Anthony radio show, on Chelsea Handler's TV show Chelsea Lately, Michael J. Nelson from RiffTrax.com during the RiffTrax for Avatar, by Jon Stewart on The Daily Show, and American Dad, by Michael Cera and Jonah Hill during promotion for the film SuperBad.