Poochee and Pansy is an ARG-related web series focusing on two puppies trying to save a cat from an evil witch. The premiere episode, uploaded to YouTube in 2009, contains a screamer, and is only the kicker to what the series becomes.

First Episode: The Quest for the Midnight Crown

in the first episode, a narrator introduces our titular puppy characters and mentions that one day, Poochee has something urgent to tell Pansy. He tells her of a strange dream he had about the cat getting imprisoned by the witch. Pansy reveals she had the same dream, so Poochee concludes that, because of that, the dream must be true. They venture to Sufferdark, where they meet up with a cave. A firefly, named Freddie, appears and attempts to guide them through the cave, only to be interrupted by a screamer, which is a piercing loud scream over an image of a skull with an eye still intact. there is the link to a website can be found on a YouTube channel information. In 2020, the video was remastered, however, the screamer was unlisted.

The video starts with a quick shot of a live-action garden. The show's title appears afterwards, but with minor visual glitches appearing on the screen. An image of Binzo Tsujii then appears appears with loud audio distortion. Next, Poochee and Pansy appear, but with Poochee missing his eyes and Pansy missing her mouth. Audio from part 1 plays of Poochee saying "Hey Pansy" and then different variations of "Yeah, you're probably right", the next scene starts with a bowl of food of some sort, then moves over to some garbage. Next, then the cameraman look's at thermostats and follows a wire, the video ends with a guy facing to the clock. the video has been taken down by YouTube for violating guidelines, the video was re-uploaded back on 2015 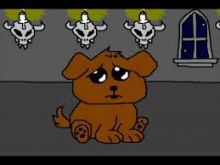 in the Third Episode, it shows a title card flashes into a darker colored version, then it returns into a normal logo afterward, Poochee sees Pansy trapped in a cage suspended in the air above a cauldron. The Witch appears and says that the only way to save Pansy is to let her rip Poochee's eyes out of his head. Despite Pansy's protests, Poochee agrees and sheds her tear as the Witch's claws inch toward his face. Just as she reaches him, a loud, then a video of a fan appears on the screen. There's a flash of the Witch grinning before it cuts to another live-action scene of a telephone off its hook and beeping. the video ends with a mannequin crying and then shows a darker colored version of the title card in the background with a text says "You Are Alon but you do not know it". 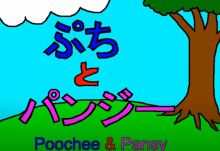 The fourth episode, which is the subtitled "Japanese version" (no Japanese version for the other episodes actually exists), is titled "Part 4: Witch Eyes", after several seconds, a picture of Witch with no eyes flashes for a second, after that, the scene shows of them talking in Japanese and the scene freeze, the video starts glitching out and also has a hidden text in the top left corner says "Cannot" and the bottom right corner says "HIDE", then cuts to a picture of icicle with a distorted noise are often heard in the video, the next scene cuts to a live-action of a cameraman walking into a snow and shows a text says "FIND YOU", the text slowly fades red, then the camera man walks out and cuts to a man with a mask and a black hoodie and cuts to an icicle, the video ends with a red text saying "Everyone in your world is dead but you. only you exist". 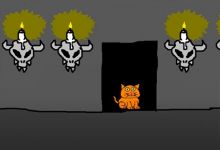 the video starts with a character from the previous video saying "YOU CAN'T HIDE" and it shows a Title Card and cuts to more disturbing imagery, then shows an episode that is blurred out and cuts to more disturbing imagery and a man with a black hoodie starts moving in an unnatural way with a loud noises plays in the video, after that, the next scene shows a kitten being rescued then it cuts to more disturbing imagery, then it shows live-action footage of a man filming a wall and with words written over it, it says "ALL DEAD", then shows footage of a man walking into a forest, then shows a Poochee talking with loud noise plays in the background and picture of poochee with red eyes and sharp teeth flashes for a second, after that, the scene cuts to a distorted picture of a woman along with a distorted scream and the video ends.

Sixth Episode: Message From the GXX%$ 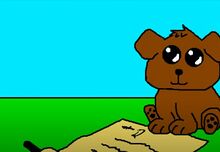 in the Sixth Episode, it shows a title card then it became distorted for a couple of seconds Then it shows an episode title says "Message From the Ganggadidle", the episode depicts Poochie and pansy sitting at the usual spot with a kitten, pansy said poochie eyes are normal again, then the poochie said, "this is the power of the eye" then it cuts to more disturbing imagery again with distorted noises play's in the video, after going through a bunch of disturbing imagery, it shows a text says "You Must Find it to become free" flashes for 2 seconds and the video. 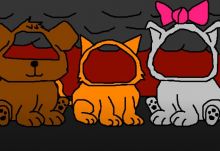 What you saw on TV is real

it shows a title card, then shows an episode title with distorted noises, the scene depicts a poochie and pansy and the kitten, after the kitten meows then it shows a jumpscare, the next scene cuts to 3 characters with no face with a distorted poochie voice telling the viewer "What you saw on TV is real". then a bunch of weird live-action videos, then it shows a darker colored background of the puppy hill and a text says "Davids mind traverses many parallels" and the second text appears says "His memories will help you."

A Special Announcement from Poochee and Pansy 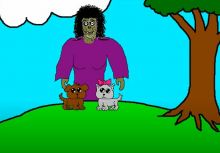 Dream Axiom presents the tenth anniversary remastered edition of Poochee and Pansy's debut episode! Great care was taken by our creative team to improve and refine this renewed experience, while retaining the charm and flavor of the original work.

Please visit (no url) to learn more about us and our projects!

We regret that this event happened on our watch, and apologize for any confusion it may have caused. We do still plan to continue this series, and it grieves us to think that our trust with our audience - you - has been damaged in any way.
We are currently exploring all options in regards to legal recourse, and pursuit and prosecution of any parties involved in the attack. Furthermore, we will not tolerate any harassment, threats, bullying, or trolling of our staff.
Any information regarding the identity of this "Technician" will be appreciated, and will be forwarded to the proper law enforcement agencies.
The fraudulent video made references to an alternate reality game or "ARG". Though we at Dream Axiom celebrate all forms of entertainment and may consider such an avenue in the future, we are not hosting or operating any hyperfiction or alternate reality games at this time.
We look forward to getting back to our work in entertainment and making the world a more fun place!
Sincerely,
The Dream Axiom Team

Characters From Poochee and Pansy

The Characters in the Poochee and Pansy Series are listed here

Poochee is a light brown puppy with black eyes, a short tail, and long ears. He's appeared in every episode to date

Pansy is a light grey puppy with folded ears, shiny black eyes, a black nose, a short tail, and a pink bow on her head, she appears in every episode just like Poochee.

The Kitten is an orange cat with pointy ears, a pink nose, whiskers, bright yellow eyes, and a long skinny tail. He was captured by the Witch prior to the events of episode 1 and sent a message to Poochee and Pansy through their dreams, since being saved by the two puppies, the Kitten became friends with them

The Witch is an old pale green-skinned lady with one (used to be two) bloodshot eyes and one black bleeding eye with a red pupil. She has black hair with white streaks on it. She has a purple robe on with black triangles on the bottom. She also is sometimes seen wearing a purple witch/wizard hat. She's appeared in many episodes, but not all of them

The Huntmaster is a man wearing a black hoodie (blue in animation), and a white, featureless mask obscuring his face, as well as gloves matching his hoodie. he appears when the disturbing images come, or at the start

The Narrator, as the name implies, narrates the beginning and end of every episode of the show. Not much else is known about him as of now, the narrator only appears in the first episode.

Locations from Poochee and Pansy

Puppy Hill is the main location in Poochee & Pansy and also mostly featured every title card. Most of the episodes begin here, and the morals are explained here. During a map segment in the first episode, it's revealed that Puppy Hill is north of Longway Road, and west of Batwing Cave

Batwing Cave, as the name implies, is the home to many bats. It's between Puppy Hill and the town of Sufferdark. It's where Skully was trapped, and a dark place to visit, an image of a skeleton jumpscares appears in the end of Poochee and Pansy First Episode

Strife Tower is the lair or home of the show's antagonist: The Witch. It's located in Sufferdark Forest.

I think panzy was probably right in episode 2

Can you show the "ALL DEAD" image?