How to Cook a Turkey 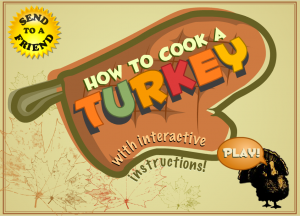 Happy Thanksgiving from the pranksters from Liquid Generation!

How to Cook a Turkey was a Liquid Generation Sabotage screamer. It's similar to How to Carve a Pumpkin Like a Pro, but with a Thanksgiving theme instead of a Halloween theme this time. The screamer was taken down along with the entire Liquid Generation website.

As the title suggests, the game gives the viewer interactive instructions on how to cook a Thanksgiving turkey through a simple flash presentation. A quiet musical loop of Bach's Minuet in G-Major (BWV Anh. 116) plays in the background, subtly encouraging viewers to turn up their volume. At the beginning, viewers are supposed to choose one of four turkeys in different sizes from a virtual grocery store. Then the instructions begin, describing things like thawing the turkey, removing the neck and giblets, and the kitchen utensils that will be required. The instructions are illustrated with short animations from time to time.

Eventually, the instructions will talk about stuffing the turkey, which is when the game becomes interactive again. Viewers are supposed to pick up the already prepared stuffing from a bowl to stuff their virtual turkey, which can be done by dragging and dropping or by clicking on the stuffing once and then clicking on the bird. Once this is done, the turkey will suddenly gain a head which screams at the viewer while the screen shakes. The turkey will then move back from the screen again and say: “You could've at least bought me dinner first!”.

"You could've at least bought me dinner first!"

This one's a classic. Also, Thanksgiving is the day after I post this comment, so... Happy Thanksgiving. Try not to eat too much Turkey, OK?

Me to da turkey: BEGONEEEE
Permalink
Retrieved from "https://screamer.wiki/index.php?title=How_to_Cook_a_Turkey&oldid=25478"
Categories: