Most Disturbed Person On Planet Earth, which is better known by its abbreviation MDPOPE, is video mixtape series created by a man named Thomas Gorecin under the pseudonym "Thomas Extreme Cinemagore."[1] The video mixtapes consist of clips featuring fetish pornography, lethal violence, and gore, stolen from shock sites like LiveLeak and BestGore. Several of these clips, such as 2 Girls 1 Cup, 3 Guys 1 Hammer, and 1 Lunatic 1 Ice Pick, had risen to infamy prior to the video mixtape's release. Despite the video mixtapes not being any more extreme than any other video mixtape of its type, it is considered by many, including its creator, as the most disturbing film of all time.

The film fully released on February 13, 2013, and was billed as "147 minutes of insanely disturbing shock footage, all combined into one single piece of media." The movie spread and was viewed only with the help of online sales. Since 2013, several reactions and reviews of the film have been made, as well an IMDb page page about it, on which the film had been rated 6.5/10, before the page shut down.

In March 2014, Thomas released the sequel to the original film, and described it as "Over three hours of the most disgusting and disturbing shock clips ever caught on camera. Guaranteed to be the most sickest movie ever made in the history of cinema." Several reviews and reactions to the sequel assert that its content is far more extreme than that of the original.[2]

The original compilation consists of 61 clips. Many of these are shock videos that were already well-known such as 2 Girls 1 Cup and 3 Guys 1 Hammer.

The threequel contains almost three times as many clips as the sequel, racking in at 325 clips.

MDPOPE 4 was cancelled because CinemaGore thought "it wasn't good enough" and decided to throw it in the trash.

MDPOPE 5 is a four hour troll mixtape created and posted onto reddit in 2020 by an enemy of Cinemagore.[3] The intro is a clip of the Joker using text to speech to explain how bad the movie can get. The movie contains a lot of dead memes pretending to be gore/snuff clips, but there are clips from Nikocado Avocado's Onlyfans account, a video of Chris-chan shoving a cake up his anus, an animation of banjo kazooie getting raped by 4chan steve, the entire A Serbian Film movie (2+ hours), and more. The movie was spread through e-mail and sent to youtubers that have discussed MDPOPE in the past, one of them being Wendigoon. The movie is currently lost, because the Reddit and Google Drive link both being deleted. 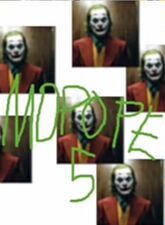 The actual cover that was sent through e-mail

If someone still has a copy of MDPOPE 5, please link it in the comments