Daisy's Destruction is a 2012 multi-part hurtcore video recorded and produced by Peter Gerard Scully. It features Scully and two Filipina women raping and torturing three abducted girls, including the titular Daisy, a toddler aged 18 months old (one and a half years). It was sold to clients for up to $10,000, being the most successful of all of the videos found on Scully's secret darknet child pornography site "No Limits Fun" ("NLF").[1]

Peter's motive was never questioned during the interrogation; he stated that he was only sexually abused by a priest when he was growing up.[2] During the first few years in the Philippines, Peter Scully recruited his Filipina girlfriend Carme Ann Alvarez to help him kidnap two children: a street child and her cousin. They were fed and then asked to strip while being recorded, as well as being asked to perform sex on each other. The videos of them were allegedly posted to various individuals and groups. Shortly after returning to his home, Alvarez became aware of Scully's motives, felt pity for the girls, and freed them. The girls immediately went to the police station, which eventually led to the arrest of Alvarez and Scully, who are charged with life without parole.

Prior to his arrest, Scully ran and operated a hidden child pornography website known as "No Limits Fun,"  where a number of videos featuring Scully's victims were produced by himself. The most notorious one was Daisy Destruction, which featured the sexual abuse of 9-month-old Daisy along with the other two girls. The multi-part video was so extreme that it was regarded as an urban legend until the existence of the video was confirmed once and for all in 2015 when Scully faced a total of 75 charges, of which he pleaded not guilty to the first six. He supposedly abducted and tortured at least 14 children and sexually abused 75 others in his crimes. Scully's crimes were so heinous that the Philippine government is hinting toward reinstalling the death penalty for Scully.

The video was broadcasted by Scully on his site and required a pay-per-view subscription. Among those (especially Scully associates) who acquired and publicized Daisy Destruction had provoked an international manhunt of those who possessed the video. In particular, Daisy Destruction was initially leaked on another darknet site, Hurt2theCore, by its own website owner, Matthew David Graham, who ran a series of "hurtcore" child pornography sites under his online alias, "Lux." Matthew Graham stated that he publicized it in the "name of freedom".[3] The link to Daisy Destruction video was also posted on the site 4chan, though the full video remains lost (for good). 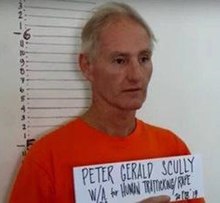 Peter having his mugshot. They also misspelled his middle name "Gerard."

Daisy's Destruction is a series of three to four videos, that are of five to nine minutes in duration, according to the witnesses. They feature Peter Scully, Liezyl Margallo, Scully's 19-year-old girlfriend, and Daisy's two abducted siblings torturing the toddler in several different ways, such as clipping her genitals with cloth clips, pouring hot wax on them, tying the child upside down, and beating her hands and feet with rope and various other material for hours, all while she is screaming and crying in pain. Daisy's two sisters named Liza and Cindy, also suffered these tortures, although their videos were not as extreme as what Daisy suffered.

Investigators later found out that Scully had tortured and raped Cindy in a video, then forced her to dig out her own grave in the basement of the house before strangling her to death with a rope. Authorities found Cindy's skeleton buried underground in the cellar.[4] However, Liza and Daisy survived Peter's wrath and escaped with the help of Scully's girlfriend. Unfortunately, due to the severe torture to her lower body, Daisy cannot bear children.

It suffices to say that even the policemen who caught Scully and had to view the video cried, went into shock, and some had nightmares for months, and that’s not very common in the case of policemen who are trained to cope with these types of things in advance. [5]