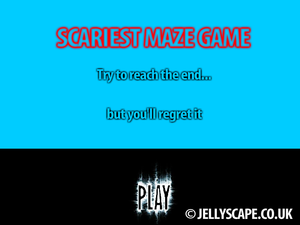 Maze Game 4 is a game like The Maze and it was made by jellyscape.co.uk. The player's goal is to control a blue square with their mouse and complete the Fifth level. Then, when the player finish the fifth level, a text appears like it's being typed, congratulating the player for completing the game. However, the sentence is interrupted and some scary pictures showing a woman with part of her face torn off, a Ronald McDonald parade balloon, a red man's face in complete darkness, a hand with a screaming mouth, and an ugly glowing blue face will appear with a loud scream. There's actually a screamer in this game and it's a picture of a zombie along with a scream, although it appears randomly. The game also knows when the player is cheating.