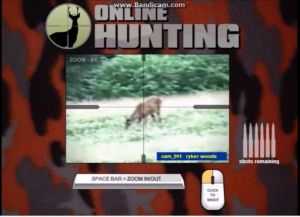 Online Hunting is another one of Liquid Generation's Sabotage screamers released on December 4, 2004. Rather than pretending to be a regular hunting simulation game, the introductory text actually claims that the user will be remotely controlling a real-life camera operated hunting rifle to shoot real animals in Eagle River, Wisconsin. The instructions further remind the player to aim for the animal's head to ensure a quick and painless kill, much like in real hunting, which, in this case, serves to encourage them to focus extra hard on the screen right before the screamer gets triggered. The screamer was taken down along with the entire Liquid Generation website.

Upon starting the game, the player will first get some fake messages about a connection to the hunting cam being established. Once this is done, they are then shown some looping, low-resolution video footage of a grazing deer. The player can move their scope around with the mouse (all directions being inverted), zoom in with the space bar, and click to shoot. As soon as the player attempts to fire a shot, however, a close-up picture of a buck with a pentagram on its forehead pops up, loudly roaring at the screen for a few seconds, and then letting out a second, higher pitched short scream. It does not matter whether the player actually aimed for the deer in the game, the screamer will get activated as soon as they fire a shot.

Looping video footage of the deer.

Since the game expects the user to zoom in before attempting a shot, a minor bug remains in the game if the player tries to shoot before zooming in. Rather than triggering the screamer right away like it is supposed to, the game will instead zoom in on the screen as if the player pressed the space bar. The shot sound can still be heard, but the “Shots Remaining” gauge on the right remains unchanged, proving that it was just there for show.

The screamer is Ben drowned wearing the buck costume