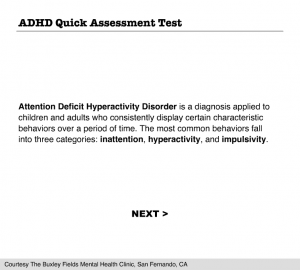 ADHD Quick Assessment Test was another Liquid Generation Sabotage screamer. It's similar to Color Vision Deficiency Test and The Hand-Eye Coordination Test, in that it claims to be a quick medical assessment tool to test whether the player may have attention deficit hyperactivity disorder. The screamer was taken down along with the entire Liquid Generation website.

The test consists of three different parts. The first one is a simple Memory game, where the player has thirty seconds to match pairs of cards depicting fruits and vegetables arranged in a 4x4 grid.

The second part is about short term memory. Players will be shown a photo for a second, and then have to answer two questions about it. There are three pictures in total. The first one shows a woman in a white room, holding a heart-shaped cream cake. The game then asks the player what the woman was holding and what color her skirt was. Next up is a picture of a blonde woman sitting on the floor with a bottle in her hand, in front of a big number 3 sign on the wall. Players are asked about the symbol behind her, and what she was holding in her hand. The third and final picture is a grayscale photograph of three boys sitting next to each other. The game asks where the boy with the glasses was sitting, and which out of seven statements apply to the boy on the left. No matter how the player does on this part, the comment from the game will always be “Not bad. Your reactions are quick, but your observation skills could use some work.”

The third part, which contains the screamer, is about following directions. Players are supposed to play twelve rounds of a version of the game Simon, where they have to repeat the moves of the computer on six colored buttons. As soon as the player makes a mistake, or when they click the third button during the fourth round, a photo of an absent-minded looking toddler with a padded safety helmet will pop up, shaking and zoom in and out in an erratic pattern with hyperactive screaming in the background, while text saying “You have ADHD!” will appear at the top in big red letters.

After, a ninja will appear and saying "You have been sabotaged'' and a link to Liquid Generation crushes him.