Shuaiby's Suicide is a shock video from Stockton, California made on March 14, 2018. The video is a livestream of Shuaib "Shuaiby" Aslam committing suicide using a shotgun. Shuaiby frequented 4chan's /r9k/ board and certain Discord groups.

On March 14, 2018, Shuaiby started a Livestream on his YouTube channel simply titled "Hey." Tarp was put on the windows to cover any debris. He starts a Discord call and two other people can be heard talking, one of them crying. A bit later, Shuaiby holds out a piece of paper with the text "Bye /r9k/." Afterward, Shuaiby loads a KSG military tactical shotgun and shoots himself. The blast knocks over the tarp and camera. Blood can be seen on the walls and ceilings. A bit later, Shuaiby's mom walks into her son's face now blown off. Shuaiby's mother, in horror, calls 911.

Immediately after the suicide, a /pol/ thread was created, which discussed the issue. A rumor began linking Shuaiby’s death to a user named Reiko, who often advertised their server on /r9k/. Allegedly, Reiko would blackmail users into taking hormones, and screenshots emerged of what appeared to be Shuaiby posting on Reiko’s server.[1] 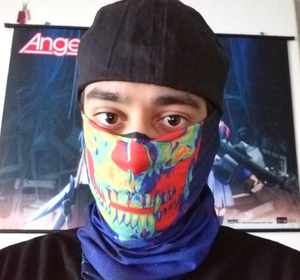 Another photo of Shuaiby with a mask. This photo was used as proof that the person disproving the original rumor was legit.

This would later turn out to be a hoax. After the Livestream, a user in Reiko’s server changed their screen name to Shuaiby’s screen name. Shuaiby’s death had nothing to do with Reiko or /r9k/, but it was rather due to general depression and problems with his mother. This was clarified in a post made by one of his friends.[2]

Shuaib "Shuaiby" Aslam was known as a kind and loving person to those who knew him. He used to enjoy things like anime and video games, and he loved discussing those things with his friends. He was very close to his friends, he kept in touch with them online. He would often message them about various topics, ranging from discussing anime to asking whether or not they'd like to play an online video game with him.

He was a member of a Pakistani-American family, and his family still holds him in high regards. He was very open about his depression, and he turned to his family and friends when he began to feel feelings of worthlessness. We all assured him that he was certainly worthy of life, and we all thought he was getting better. He was always very open about how he felt, so we thought that was a good sign. We continued to stay very close to him, we had his back 24/7. We always told him that life was worth it, and that suicide was a permanent solution to a temporary problem. We assured him that there was no reason for suicide, but I guess it didn't get though to him.

He took his life on March 14, 2018, much to the dismay of everyone he knew. We still wonder if there was anything else we could've done. We're sorry, Shuaiby. We hope that you have at least found eternal peace in your decision to end it all. Maybe in another universe, you're still here, enjoying life to its fullest without any doubts of life's worth. We're sorry that we didn't do enough, Shuaiby, and we're still mourning your death to this very day. I hope that you can read this, Shuaiby. May you rest in peace for eternity."[4]