Encyclopedia Dramatica, often abbreviated ED or æ, is a website consisting of a satirical MediaWiki based wiki and a XenForo based discussion forum. It was created by the website's owner Sherrod DeGrippo on December 10, 2004. The wiki is a parody of Wikipedia, containing much more offensive/vulgar content, and harassment campaigns; however, much of the offensive content is done solely for "the lulz."[1]

The wiki contains five infamous shock pages including Offended, Kittens, and Puppies, and Reporting Un-Islamic Content. Many articles on this wiki contain shock images such as Goatse, Blue Waffle, and Lemon Party among many others, as well as numerous other gruesome images. Encyclopedia Dramatica is known for having something vulgar/disturbing on every single page. The reason why æ is used as its mascot is that, according to the site, it's "confusing and mysterious like ED itself".

After that, the site moved domain extensions plenty of times from .rs to .se to .ch, and many others, usually because of the owners being arrested or banned. 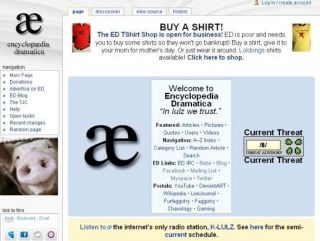