Jeff the Killer, also called Killer Jeff, is an infamous creepypasta, internet urban legend, fictional character, and image commonly used in screamers. Jeff the Killer refers to an edited image of a pale, noseless, unknown person with black eyes with white and black pupils, and a long canine-like smile, in a dark room with laundry hanging in the background. The creepypasta surrounding the image suggests that the person in the image is a 13-year-old serial killer named Jeff who sneaks into people's homes and whispers "Go to sleep" before killing them with a knife. A user named Sesseur was the first person to create a story behind the image, but his version does not revolve around the person in the image being a serial killer. Instead, a remix version of the story was made more popular than the original and revolves around how Jeff psychopathically became a serial killer from his insanity.

This image became controversial shortly after it was believed to be of a supposed woman named "Katy Robinson," who had allegedly committed suicide in 2008. This belief originated on 4chan in 2008, but after years of extensive research, it was revealed that the image originated on a Japanese message board website called pya.cc in 2005.[1] This more famous image, in particular, is also an edited version of another earlier version, called White powder (2) (also called JTK 1), which appears to be an edited image of a person with googly, cartoon eyes and a large smile. The former file name of this image was "prettyFACE.jpg" before it was posted onto pya.cc.[1] The more famous version was further edited in Adobe Photoshop to make the mouth stretch out using the liquify tool and the eyes edited to have white and black pupils.

The first person to create a story around it was a DeviantArt user Sesseur.[2] In the original story, a person named "Jeff" was hauling a gallon of acid into his bathroom to clean his bathtub. Suddenly, Jeff accidentally slipped on a bar of soap, fell on the floor, and the gallon of acid splashed over his face. Jeff's neighbors began hearing him cry for help, taking him to the hospital. The incident happened while his brother, Liu, was at work. The accident permanently disfigured Jeff's face.[3] The first story does not revolve around Jeff being a serial killer. However, one of the fans of Sesseur, named GameFuelTV, wrote a story about Jeff in a completely different way compared to the original, by portraying him as becoming a serial killer because of his insanity.

The fan's version of this creepypasta centers around a 13-year-old teenager named Jeffery Woods who lived in a normal Surburuan town with his parents and his brother Liu. Jeff had thought of the idea of moving into another neighborhood after his father got a promotion, which his family agreed to, and moving on. On his first day of school, while hanging out with his brother, the three bullies approach the two and mug them at knifepoint. Jeff urged the feelings and began fighting them, paralyzing three of them. He and his brother exited the scene to board the school bus for the ride to school. A day later, police arrived at Jeff's home, where the two were accused of attacking the bullies with no manners. Jeff even tried to convince the police that the bullies were mugged, but the police failed to believe him. However, Liu snitched on Jeff by making them believe that he was the one to blame for the whole incident, which drove Jeff into depression and stress. His mother suggested moving to a party to make him feel better. However, Jeff managed to run up to the bullies, and brutally beat them up, and he managed to kill one of them. Then, Jeff lured the two other bullies into the bathroom and began wounding them, but he was doused with alcohol and the bullies set him on fire.[4][5] He woke up from the coma at the hospital, where he saw his mother informing him that Liu was released after it was revealed that Randy was the one responsible for the incident that happened with his brother After taking those bandages off, he found out that his face had become disfigured from the burns, which has a ghostly pale,[4] but Jeff oddly seemed to like his face this way. After being told to go home, Jeff's mother saw him burning off his eyelids and carving his own face with a smile.[4] This led his mother to tell his father that he had become insane and needed to be killed. Jeff heard this and killed them. Jeff became a serial killer that sneaks into people's home and tell them to "go to sleep" before killing them,[4][6] such as Jeff going into Liu's room before telling him to "go to sleep" before being fatally killed with the knife plunged into his chest,[5] finishing the story.

The backstory behind Jeff was first made by DeviantArt user Sesseur, but he was not the author of the story above. Sessuer's story, which was uploaded to YouTube on October 3rd, 2008,[7] was completely different than the one shown above, and suggests that Jeff accidentally spilled a gallon of acid onto his face while cleaning a bathtub,[3][7] while the more famous version, which was written by a fan of his earlier work, is about the consequence of Jeff becoming an insane serial killer. Jeff's real name in the actual story was Jeffery C. Hodek, rather than "Jeffrey Woods" in that manner. On August 14, 2011, the image was posted to 4chan captioned "Go to sleep"; the caption had become known as Jeff's signature catchphrase.

Prior to the original backstory video, Jeff The Killer was seen on the account "killerjeff" on Newgrounds,[8][7][2] which was created by Sesseur on June 7, 2006, pretending to act as his version of Jeff. In one of the account's news posts, posted on August 10th, 2008, Sesseur stated that he had found the photoshopped image on Encyclopedia Dramatica, and he decided to create a back-story behind it. Jeff was originally supposed to be a game similar to Bloody Mary, where the person must hide in a closet with all of the lights in the room turned off, sit down cross-legged, and repeat the sentence "He's in here with me" three times while turning their head back and forth. After doing this, the person must close their eyes and call out the name "Jeff," so that Jeff will appear in front of them. This can be stopped by standing there and complimenting him; otherwise, the person will have nightmares.[9]

At an unknown date, the original backstory video was removed after YouTube terminated Sesseur's channel. The Brazilian channel PhenomenonPoltergeist shortly re-uploaded the video to YouTube on January 20, 2014, but the original video was muted, which claimed to have "I Guess You're Right" by The Posies as the background music. Later on, the video with the original audio was finally uploaded to YouTube by user Bob's Brother on an unknown date, but was deleted after the channel was terminated.

As creepypastas became a major fad, many screamers used the image of Jeff the Killer as their segment to scare the viewer, examples including Anne.jpg, Spooky Scary Skeletons and more. The first screamer ever to use Jeff the Killer as a jumpscare image was a YouTube video titled NNN Special Broadcast made on August 2, 2007, which was made for a horror film project named "Victims of Tomorrow". The image appears at 4:11 before the text "おやすみなさい" appears on a black screen, which translates in English to "good sleep", which is similar to "go to sleep". 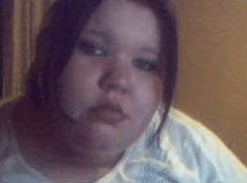 Katherine White's photo which was widely rumored to be the original un-photoshopped image.

The image received controversy[8] after it was rumored to be an unedited photo of a woman named "Katy Robinson," who committed suicide after finding herself being bullied[3] for her weight on 4chan.[7][2] This started when one post on 4chan, dated April 21, 2008, was written by a supposed brother of Katy Robinson claiming that she had committed suicide after she was bullied for having her picture posted on 4chan. However, some users say the image is actually of a dog with a broken jaw.[7][2] During Sesseur's interview with ScareTheater, one of the questions involved the origin of the image, to which Sesseur answered by claiming that the image was a picture of himself wearing a white latex mask.[10]

The earliest sighting of this image was on the Japanese message board, pya.cc, where the two images (including the less edited and the greater edited ones) were uploaded.[11] These two images are uploaded between September 10 and November 16 in 2005, by users Mr. Malholland and Omega Boruto (Omega Volt). The first image, named "White powder (2)" was a less edited version than the one used for the character of Jeff. After finding the image through extensive research, it was revealed that the woman in the picture was named "Katherine White", who still lived with her two kids. One Reddit user also contacted Katherine through Facebook to ask if she was aware of being rumored to be dead by 4chan users. She responded by threatening those who made that rumor about her death on /b/ with a lawsuit.[11] The image of this woman was originally posted to the site TrueChristian.com on November 17, 2004.[12]

Another story was created to explain the origin of these images, made by a few users on 4chan's /b/ imageboard. The story involves an alleged woman named "Victoria", who was a webcam model on Stickam who used /b/ for self-promotion purposes. A /b/ user took a screenshot of her face and posted it to the board with the caption "Am i pretty?". Later, other users on 4chan began photoshopping the image and posting their edited version back as a reply, with one of the users posting the less-edited image with the caption, "Now you are." The woman then found out about the post and quickly vanished off the internet.[13] This Victoria is another example of people who were rumored to be the person in the image. One more rumor suggests the image is of an overweight Japanese girl in a room with hanging laundry who spammed her image across the Japanese image board 2chan (Futaba Channel) in 2004.

The original file name of the less-edited Jeff the Killer image is White powder (2), suggesting the existence of another version that predates the existing two. Some people have speculated that an image known as "Green Eyed Jeff" may be the original, though this theory has been proven false.[14] Investigators were able to track down Mr. Malholland, the pya.cc user who first posted the White powder (2) image on that site, on his Twitter account Miyama. His responses to the investigator's questions were:

Mr. Malholland (Miyama) suggests the image originated from an unknown video, and that Jeff the Killer is a highly photoshopped image of a woman. He claims the image was already photoshopped when he found it, and he slightly edited it further and posted it to pya.cc, meaning he created the White powder (2) (JTK 1) version, but not the original photoshop. Omega Volt took his edit and turned it into the famous Jeff the Killer image (JTK 2). For now, the complete origins of Jeff the Killer remain unknown, this alleged video remains lost, and the search continues.

If you recall ever watching such a video, as Mr. Malholland described, or have any helpful information, please let r/OriginalJTKImage know or reply in the comments.