Welcome to the Screamer Wiki, the number one place to find information about screamers. We are the biggest and most active community of screamer fans on the globe. Here, you will have access to the Screamer Library, one of the largest indexes entirely dedicated to screamers and shock sites. You will find the origin and story behind every screamer ever made, like the famous Scary Maze Game, the K-fee commercials, and a whole lot more. Our library contains 1,174 pages and that number keeps increasing everyday! 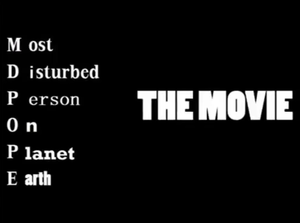 Most Disturbed Person On Planet Earth, or better known by its abbreviation MDPOPE, is a series of shock video mixtapes created by a man named Thomas Gorecin under the pseudonym "Thomas Extreme Cinemagore."

The video mixtapes consist of clips featuring fetish pornography, lethal violence, and gore, stolen from shock sites like LiveLeak and BestGore. Several of these clips, such as 2 Girls 1 Cup, 3 Guys 1 Hammer, and 1 Lunatic 1 Ice Pick, had risen to infamy prior to the video mixtapes' release. Despite the mixtapes not being any more extreme than any other mixtape of its type, it is considered by many, including its creator, to be the most disturbing film of all time.

The film fully released on February 13, 2013, and was advertised as "147 minutes of insanely disturbing shock footage, all combined into one single piece of media." The movie spread and was viewed only with the help of online mixtape sales. Since 2013, several reactions and reviews of the film have been made, as well an IMDb page about it, on which the film had been rated 6.5/10 before the page shut down.

In March 2014, Thomas released the sequel to the original film and described it as "Over three hours of the most disgusting and disturbing shock clips ever caught on camera. Guaranteed to be the sickest movie ever made in the history of cinema." Several reviews and reactions to the sequel confirm that MDPOPE 2 is far more extreme than the original.

Thomas released the threequel of the series in 2019, and attempted to make this version the worst in the entire series. MDPOPE 3 doesn't have many reviews, but in mondo-film related communities, people admit that MDPOPE 3 is way worse than it's prequels.

The series became better known in 2021 when Reddit user nice-guy-phil uploaded a "Disturbing Movie Iceberg" which mentioned the series. This chart was later on reviewed by a large number of YouTubers.

How Can I Contribute?

Screamer Wiki needs more contributors. If you need help getting started, do not worry. There are plenty of help articles and guides available on the Help Portal. You can help by creating new articles, adding information to pages, or by fixing stub and cleanup pages. If you're not sure what to edit, you can click Random page under Navigation on the side of the page and help fix information/grammar on any random page. If you want, you can also refer to the Quick Links section at the top to know where to start.

You can help Screamer Wiki too by saving already existing screamers, shock sites, and videos to the Internet Archive (https://archive.org/web/). If a screamer or shock site gets deleted, banned or removed, then it can still be viewed on the Wayback Machine.

The message displayed on Kekma.net shortly before getting taken down.