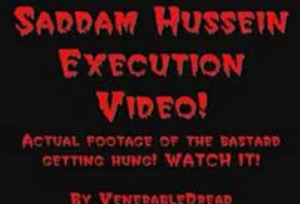 Saddam Hussein Execution is a screamer video uploaded by VenerableDread on December 30, 2006.

The video starts with text telling you: "Actual Footage of the Bastard Getting Hung! Watch It!", then it shows a flurry of disturbing pictures very fast like a red-colored image of Pennywise from the movie IT, a skull, a face from What's Wrong?, Regan MacNeil from The Exorcist, a seemingly looking monster, then the same picture in negative, another monster, another skull, a scary looking body, a picture from the short film Rubber Johnny, Jigsaw from the SAW Franchise, a man screaming with mouths as his eyes, a man screaming in negative, yet another skull, another man screaming in negative, a distorted man screaming, eyeballs on someone's hands, and a photo of a spider zooming and flashing in negative while a long shriek plays, then it shows a footage of a ConSec scanner's head exploding into bits and pieces, which is taken from Scanners (1981).