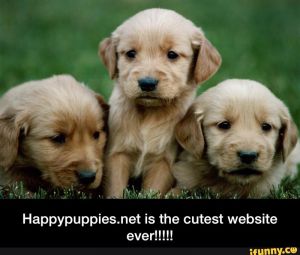 "There's no happier puppy in the world!"

happypuppies.net was a shock site created by a guy called Andrej Nadpodnik in May 2007, which shows a slideshow of extremely terrifying and gruesome images meant to shock the viewer. The website has been deleted. it used to show Lemon Party image and much more

The happypuppies.net domain has undergone some changes since its creation. It was created on January 15, 2000, and at this time, it was a site for a retro game emulator. In 2004, the website got granted to someone else for another time. Approximately ten years later, the website became exactly what it is now, a shock site. Then it got deleted.

this was meant to be a cruel joke

just another site leading to the same shit ive seen

LAME but i like the first picture of puppies

how come every shock site always has goaste on it?? its not that bad

I laughed at these not gonna lie

Judging by the watermark, the image must had been from IFunny.

(I'm must not be the only one who saw that watermark)

8 months ago
Score -1 You
It's Afucking shock site

28 days ago
Score 1 You
It contained the Goatse image in 2001, i found out that in the Wayback Machine