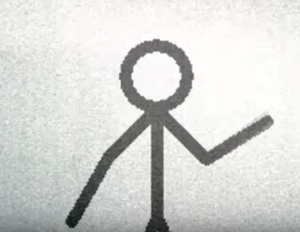 Stickman Screamer 2 is the sequel to Stickman Screamer made by Log Bog. It starts off with a message that in 2001, a group of low-budget filmmakers created a short animated film, and that something in the footage had baffled experts in the entire world.

The video then cuts to a stick figure waving their hand, while being zoomed in. Some text then appears saying "Did you see it?". The zooming sequence is repeated again, and when the video reaches 43 seconds, it is suddenly blocked by a stretched zombie face with its mouth open and a scream, that appears very briefly. At the end, another line of text appears saying "Did you see it this time?".

probably the best video I've ever seen, the static makes it look creepier and zooming in, yyep this is well made.